I know, I know. I said I was going to go take a break, but I've got a responsibility to you, gentle reader, to take care of these.

The tale of the tape is as brutal as you'd expect - not only were the Jackets outchanced in the game, 11 to 17, but they gave Ottawa the bulk of their chances in the third period.

I'll also bring up the fact that two of our D pairings (Tyutin/Clitsome, Johnson/Russell) each logged over 24 minutes a skater, while Moore/Savard logged less than 10.

I get being afraid of matchups. I get protecting the kids. But could fresher legs in that final PP have made a difference? You have to wonder.

Also, Sammy Pahlsson, the season has started. Could you please report to the ice?


Zack Smith and Chris Neil should have gotten game pucks for their efforts against the Jackets, particularly in the second and third period where they worked very hard to create chances and deny opportunities. 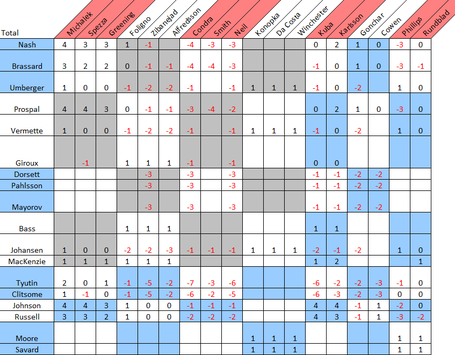 Arniel clearly tried to go Power for Power against the Spezza line, and i'd argue it worked pretty well. But the Tyutin/Clitsome pairing was just brutal. There's no way to say it but that.