Another game, another loss, another batch of uncapitalized chances - and once again, we see a team who buries their shots when they find them.

Columbus was clearly demotivated in the third period, and it shows - their only quality scoring chance was the one Aaron Johnson buried. Before that, they actually had a very strong second period, and one has to wonder what might have been if the PK could have shut the door early.

In the words of Bruce Boudreau, "You guys look @#%*ing defeated!"

Special teams were all at fault - not just the PP for failing to convert, but for allowing the Red Wings almost as many scoring opportunities shorthanded as at even strength.

Meanwhile, the PK gets equal fingers pointed at it, as the Red Wings converted almost at will.

The worst, though, is the third period, where Detroit went virtually unchallenged.

If we look at the Head to Head stats, you can see that the Wings didn't just neutralize the top line, they paralyzed them, generating more scoring chances against them than they did any other group. Grant Clitsome also didn't help his cause, getting victimized by Nicklas Lidstrom in particular.

Full credit, though, to the second line, who were powered by Vinny Prospal, and to the fourth line - Ryan Johansen in particular. I'll come out and say it - he needs more time in the top six. Max Mayorov also earns a gold star - I wonder what might happen if he were paired with, say, Johansen and Prospal... 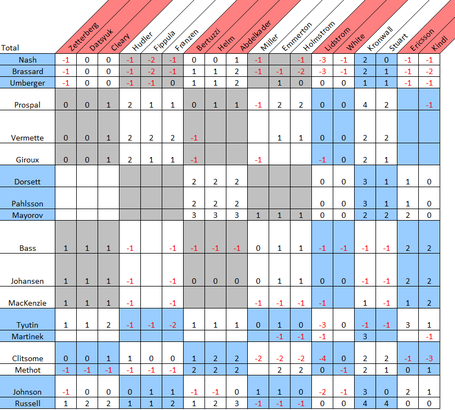