In a game where the Jackets outshot the Stars 40-18, it won't surprise you that the Jackets out-chanced the Stars, but what will probably infuriate you is just how badly the disparity shows up, and how the Stars collected on their chances while the Jackets could not.

I think it's fair to say Kari Lehtonen played a big part in stealing this game - particularly when you see some of the obvious rebound opportunities and bang-bang chances, only one of which (Brassard's goal) was capitalized on.

That said, if the team could put out this level of effort every night, good things SHOULD happen.

Let me be the first to ask, Kris Russell, what did they put in your wheaties? Russell not only had some excellent defensive plays and his late goal, but was an aggressive pincher and generated a pair of scoring chances singlehandedly. On the other side, he was also one of the players burned on the Ryder goal, but still.

Despite the lack of net presence, especially 5 on 5, it's encouraging to see the Jackets getting more second chance scoring opportunities, but they simply have to start capitalizing. The biggest difference in this game was that the Stars converted when they had opportunities, and the Jackets did not.

Full marks to the Jackets PK for denying Dallas any quality scoring chances with the man advantage - that's an area that seems to be improving rapidly. Now we just need the rest of the special teams play to catch up. 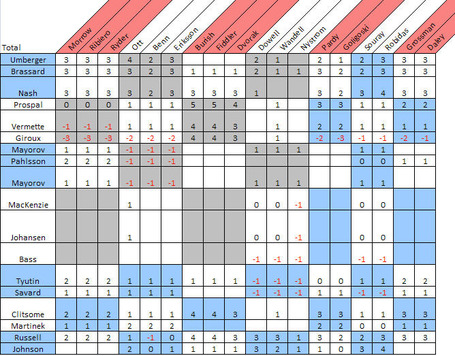 For all the good things, the glaring weakness is the 2nd line, who allowed the most chances to Dallas' top line, and ended up being burned by them for the GWG. As much as I appreciate that Alexandre Giroux is making things happen in the offensive zone, we need him to be better in his own end.