In a game where the Jackets were outshot 33-15, it's not going to surprise you to hear that we were badly outchanced, particularly in the second period.

It's also not going to surprise you that the majority of the scoring chances are being driven by the top line - but it is a major issue. The Jackets need secondary scoring like a drowning man needs a life raft, and until they get it, I don't see this team really making any headway.

Like I mentioned up to, the "best" even strength forwards are a very weak interpretation because even thought they only gave up one scoring chance, they didn't generate anything 5 on 5.

If there's some MILD good news, it's that most of the Jackets' 15 shots were legit scoring chances, or lead to scoring chances via rebound, and that the PK did an excellent job of denying Dallas' power play dangerous looks. But that's some very thin hooks to hang hope on.

Of the units that did generate even strength chances, it's clear the top line was doing all the work, and despite Alexandre Giroux getting his first goal as a Jacket, he and Antoine Vermette were a serious liability out there. Oh, and for those who might say Portzline was right and the Jackets should have pursued Sheldon Souray, notice that he was one of the ONLY Dallas defensemen the Jackets were consistently able to generate scoring chances against.

Here's your head to head matrix: 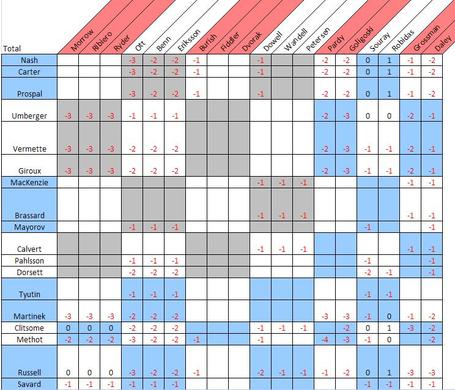