We Want You To Take A Seat!

Share All sharing options for: We Want You To Take A Seat!

You may have noticed this year that SBNation has been partnering with TiqIQ (that's the "Tickets!" link up there on the top menu) to provide you with the best deals on tickets to Blue Jackets games this season. Just to sweeten the deal, the guys at TiqIQ have decided to hold a little contest, and you guys get to take part.

To play, you need to follow @TiqIQ on Twitter, then tweet us here at @CBJCannon with the name of the player you think will be leading the Jackets in PIMs at the end of the day on November 30th. Include how many PIMs you expect him to have under his belt, and the #TakeASeat hashtag. Entries are due by October 31st, 2011, and the winner of the contest will be announced on December 9.

The winner gets two tickets to the Jackets home game of their choice in December or January! Good luck! 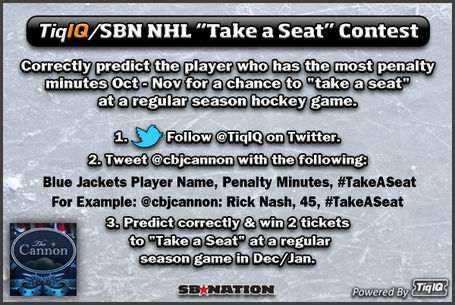