Columbus dominated the game for two periods, then collapsed in the third after a failed penalty shot.  Strategically, Scott Arniel hard-matched the Pahlsson line against the Sedins.  Pahlsson played 12.6 minutes at even strength, 10.5 of those minutes came against Henrik Sedin.  The Mayorov - Pahlsson - Dorsett line held their own and won the chances battle against the Sedins, but Jeff Carter's line did not hold up their end of the bargain.  Prospal - Carter - Nash played 12.4 minutes at even strength, just over 5 minutes against Cody Hodgson and just over 4 minutes against Manny Malhotra and were a -1 in chances on the evening.

Just after the 4:00 mark of the third, Sportsnet West flashed there chances totals to that point:  12-4 Columbus.  At the time I had the game at 14-6 Columbus.

I've included Mayorov's penalty shot as a chance for and against the two lines on the ice at the whistle.  It doesn't make sense to charge that chance to the goalie only if he didn't create the penalty shot. 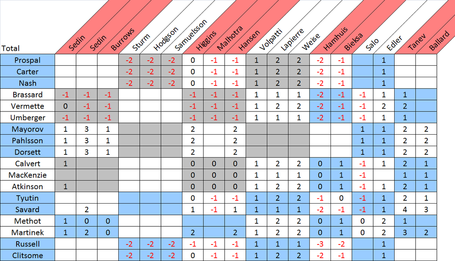 If not for the work against Vancouver's fourth line, the Prospal - Carter - Nash would have looked bad at even strength.  The third line's work against the Sedin line was very strong.