I'm very glad you asked me that, because it's a word I just made up! I got the idea from Tapeleg, who writes the Jerseys and Hockey Love blog. He was looking for a fun way to do a season preview, and decided he'd start tweeting out his brief preview / prediction for each team.

I thought that was a great idea, but why stop at the team level? So, what we have here (and in a couple more posts to follow) are my thoughts, in 140 characters or less, for each of the players the Jackets have invited to training camp. For most, I'll be talking about expectations for the 2010-2011 season, but in the case of players who are hoping to make the jump to the NHL, I'll give you what I expect to see (if I can find enough to draw a conclusion from, anyhow).  With that in mind, here we go! 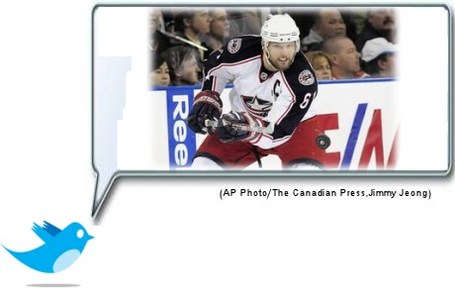 Cam Atkinson: You were a pleasant surprise last season, but take this year to get even stronger, faster. Take BC back to the frozen four, then go pro.

Mike Blunden: Steady as a rock when called up, but if you don't hustle in camp, expect a lot of bus rides. Can you prove you belong?

Jared Boll: Sometimes knowing when to skate away is as important as when to fight. Can you turn flashes of maturity, scoring into real brilliance?

Derick Brassard: To whom much is given, much is expected. This could be the year that defines you...or breaks you. Can you meet the challenge?

Matt Calvert: Excitement, Talent, Energy. But you're not in the WHL anymore. Show you can succeed in Springfield and you'll find yourself in cbus v. soon

Chris Clark: We need you to be solid. Play well with Pahlsson, give confidence in the locker room, and help point the way to the playoffs again.

Sean Collins: For a 2008 draft pick, it's bad that I had to look you up. Maybe you should stick to hitting the books at Cornell...

Derek Dorsett: We need you on the ice, not on the trainer's bench. Mind the demands of your body - but don't dull your edge! You spark this team.

Nikita Filatov: From Russia With Love? We want to believe in you. Can you handle the top six?  Show us something wonderful. Reward Howson's patience.

Trevor Frischmon: Everything about you screams "Career AHLer". Sorry, man. No sign that will change this year.

Dan Fritsche: Being from Ohio isn't enough. Can you accept fourth line? Will you fit in the room? Would love your speed in Arniel's system...

Ben Guite: You came to the NHL the hard way. Be proud of that - but don't be surprised if you're shepherding the kids, not living the dream.

Jake Hansen: You disappeared last year - can't even find stats for you! Are you finished before you even began?

Kristian Huselius: If you hit half as many posts this year, you'll be amazing. 70+ points? Certainly seems possible. But will you be on the 1st or 2nd line?

Ryan Johansen: You're going to be huge, some day. Beautiful hands, but I don't think this is your time. Soon, but not yet.

Tomas Kana: 4th line center? Maybe. You're on the right path, but it would be nice to get a better look at you first.

Chad Kolarik: Hey, you were pretty good in San Antonio! Could you be a training camp surprise? We don't really hold going to U-M against you. Much.

Tomas Kubalik: Another Czech! Pretty decent last season in the Q. Scoring talent! Back to Juniors, or is it time to go pro? My gut says Springfield.

Sergei Luchinkin: Are you really a prospect when you're 34? Will you even be at camp? Doubtful.

Kevin Lynch: Tough guy, two way, keep hearing you could be a future shutdown center. Back to the NCAA for now, but eventually...

Derek MacKenzie: Thank you for always stepping up when called. Classy, classy guy. Maybe, finally, a regular bottom 6 spot? If not, Captain in Springfield.

Maxim Mayorov: So much interesting potential, so up and down a player. Do you really get it this year? Or will you be another guy heading back to Russia?

Greg Moore: You're not the Moore we're excited for. Not your fault, really. Solid AHL guy - should make Springfield fans happy.

Ethan Moreau: You could be a feel good story, or you could be the punchline of a bad joke - it's up to you. Play the role - perhaps break 20 points again?

Tyler Murovich: A good OHL player, but never quite great - you showed promise with the Crunch. Earn a call up or two, perhaps you just needed time to grow?

Andrew Murray: Weighty, Heavy, Steady. Never given a thing, but you earned a lot. Can you keep outworking the competition? This is a big year for you, too.

Rick Nash: Being a captain is more than scoring the most goals. Don't say you are a leader - prove it! Stop requiring crutches in the room. 85 points?

Kyle Neuber: A future enforcer? Perhaps. Will we need one? Let's see what happens after a year or two in Springfield.

Samuel Pahlsson: Tough year, lots of tough minutes. Keep up the solid defense, and make the best of your linemates.

Matt Rust:  Point a game college player! Very nice. Go back for senior year, or try to translate to the pros? Springfield if so, callups possible.

Tom Sestito: Lots of fights, not much else. He's on Twitter now! So he'll probably yell at me. Wish I could say more - enjoy Springfield, @TomSestito.

Dalton Smith: Fresh new blood! Good OHL player so far - back to juniors for now, but keep an eye on him.

Petr Straka: Impressed a LOT of people at rookie camp - a little bit of a draft steal? Can't wait to see what he looks like with a bit more size, muscle.

Dimitri Subbotin / Ivan Tkachenko: Why do we have a bunch of old Russians listed in the system? Did Sears have a sale?

Antoine Vermette: You're succeeding with the top line. Just little improvements - PP work, shooting - could help you rise above the crowd. 70 points? Easily.

Trent Vogelhuber: We all cheered when you were drafted in 2007. Mucking and grinding your way through at Miami (OH) - AHL soon, anything else uncertain.

Jakub Voracek: First line? Second line? Poised for a big year. Could be the breakout star if all goes well. 60 points? Possibly. Needs to improve +/- tho.

Kyle Wilson: You won big in Hershey - can you show Springfield how to do the same? Doubtful for bottom six in Columbus, but could earn time now and then. 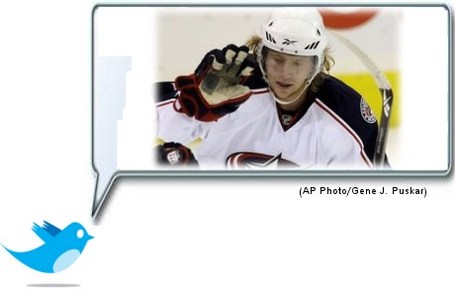 I hope you guys enjoyed these - I'm planning to cover the defense next, then another post for our goaltenders (and a brief touch on the new coaching staff). Let me know what you think in the comments!

(Also, special thanks to Art Middleton from Defending Big D for his photoshop help!)