Welcome back to the Friday Followup - looking at stories from the past week here and abroad.

On the home front, we asked what you'd like to see from the blog in the upcoming month, we offered you an update on CannonFest, we discussed Nikita Filatov's early return to Columbus, Mike gave you some fantasy hockey advice, and thanks to a Fanpost from PhillyPhan, we had some good discussion over just who really improved this off-season.

Elsewhere, we got a bit of Puck Daddy's take on Filatov's return, Light The Lamp asked if the NHL's pre-season format needs to be revamped, and Dark Blue Jacket threw down a challenge to Fox Sports Ohio and the Jackets, asking for all 82 games to be broadcast in HD.

Going to the Dublin Irish Festival? So are Boll and Dorsett. No word on if they'll do a ceremonial glove drop to open the festival.

Down Goes Brown has the CBJ as one of his "off-season winners"...which I'm sure, somehow, should feel like an honor.

The NHL has announced plans to test out several proposed rule changes at their annual R&D Camp. Former CBJ coaches Ken Hitchcock and Dave King will be leading the camp. I'm interested in the no-touch icing and getting rid of the Gretzky rule, but I'm not really sold on the OT changes.

Could the Blackhawks bury Cristobal Huet in Europe, instead of the AHL? (Puck Daddy)

The Pittsburgh Penguins unveil their "All Time" team. (Kukla's)

Proposing a Canadian Major Junior hockey tournament...to be held in the US? (From The Rink)

Why this week's Deadspin 'expose' hurts ethical sports bloggers. (On The Forecheck)

Why we shouldn't have any pity for Dale Tallon and the Blackhawks this off season. (Maple Leafs Hot Stove)

That's it for this week! Have a great weekend! 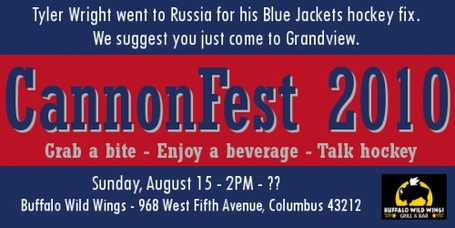