Share All sharing options for: Friday Followup: Come to CannonFest! 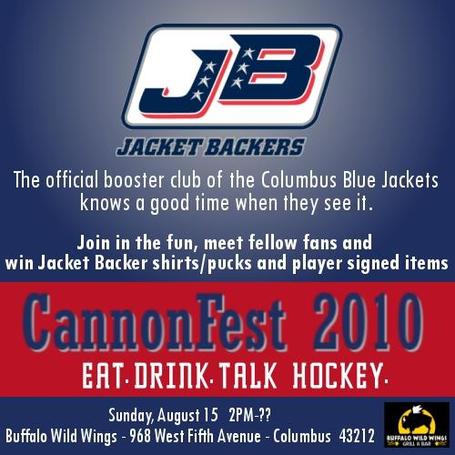 Yes, it's almost here - this Sunday will be our first (but hopefully not last) CannonFest, featuring CBJ bloggers from around Ohio, the Jacket Backers, Fan Videos, giveaways, prizes, and visits from Blue Jackets VPs Todd Sharrock and Larry Hoepfner. It should be quite an afternoon, and we hope to see you there!

Also, I promise that aside from a possible post-CannonFest wrapup post, I'll calm down and stop hammering you over the head with it until next summer. :)

So, with that said, what else did we get up to this week?

Mike wrote a fantastic preview of the Springfield Falcons, with a careful look at returning players and the new talent expected to make their way into the lineup. Andrew gave us a chance to place our bets on Over/Unders for the 2010-2011 season, we talked a bit about what the Mike Blunden re-signing means for the team's depth, we had a fantastic FanPost from PhillyPhan85 about the love and hate relationships between fans and teams, and I took a shot at comparing the Blue Jackets with another team in the NHL that's getting a lot better feedback from the media, despite being in a very similar situation...

Over at The Jackets Blog, Lee asks if you remember the man who wore #57, Puck Rakers has a look inside this week's coaching meetings,  and the guys over at The Green Seat View continued their look at goaltending in the Central Division.

Over at Light The Lamp, LTL praised the team for it's recent Game Operations Survey and put out the word that CAHL player Angelo Serra and his family can use help from the community after the tragic loss of their house in a fire. Please take a look to see if you can help.

Last but certainly not least in the local news, The Green Seat View guys also started a new series called "The Case for Columbus", looking at how attractive the city is to prospective free agents. Here's part one of their series: The Fans.

Meanwhile, in the greater hockey world, here's a few interesting tidbits to keep you going:

Puck Daddy takes a look at 5 teams with clear off-season needs to see how they did at correcting their problems.

Jeff Little over at The Hockey Writers takes a look at hitting in the NHL, and if "winning" in that stat isall that it's cracked up to be.

HabsWatch looks at the slow reduction of European talent coming into the NHL through the draft and free agency, and draws some surprising conclusions on where the replacement talent is coming from.

There was a..."little accident" with the engraving on the Prince of Wales trophy. (Puck Daddy)

A virtual hockey card experience: Opening packs of '82-83 O-Pee-Chee cards! (Anyone want to trade for my extra Jamie Hislop?)

NHL Network's "On The Fly" will finally be aired in HD this season! (Puck The Media)

PTM also concluded their "Suitor Tutor" series on where the NHL should look for their next TV contract. Worth reading.

That's it for this week here at The Cannon. Hope to see you Sunday!