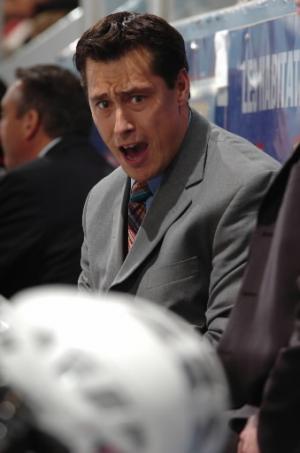 Late this afternoon, the word broke over Twitter that Guy Boucher had turned down the Columbus Blue Jackets head coaching position.

Rumors abound about why he may have turned the position down, but the simple fact is that there are many potential reasons why he chose not to accept the offer, and we will never know for certain. Perhaps he didn't want to leave the Montreal organization. Perhaps he wanted more experience in the AHL before taking a job in the NHL. Perhaps he made demands that Columbus could not accept. Perhaps he thinks another organization would be a better fit. Perhaps he didn't wish to deal with the travel in the Western Conference. Perhaps his wife and children did not want to leave Canada to come to the United States. Perhaps he couldn't accept the prospect of breakfast in a country without peameal bacon. In the end, it doesn't matter.

(Edit: Or perhaps he's taking the head coach position over in Tampa Bay.)

More than a few CBJ fan twitterers (twitterees?) and bloggers have cast this as a massive rejection - the doom of the franchise. One more insult on the team and its' fans that the front office has no way to compensate for.

The fact is, that simply isn't so.

The search for a head coach has been run in a very businesslike fashion, with multiple levels of interview, a pool of candidates, and a good deal of planning that both traditional and nontraditional media have barely been able to scratch the surface of. (How else do we explain Howson and Boucher having not one, but two interviews in total secrecy? One of which apparently included both Mike Priest and J.P. McConnell?)

In part, I blame the panicked reaction on the Dispatch's Aaron Portzline, who used his Twtter account to post the rather inflammatory  "Boucher has turned down the Blue Jackets. Unclear where the Blue Jackets go now." This was, at best, an attempt to drive traffic to the Dispatch's Puck-Raker's blog, and at worst, an attempt to once again game the fans for his own biases, given Portzline's rampant campaigning for Kevin Dineen, by pushing the panic button and giving the impression that Scott Howson and the rest of the CBJ front office had somehow put all their eggs into one basket and dropped it.

Howson has always been a man with Plan A, B, and C, and rarely given to panic. Just look at how he handled the 2009 entry draft, manipulating the team's first and second round picks to secure the player he wanted, and not being afraid to trade down a few times. Look at how he handled the negotiations with Rick Nash, keeping a steady hand on his tiller and bringing the captain's extension to a relatively quick close despite an initial firestorm over a supposedly "lowballed" initial offer. Howson is not gambling with this franchise - he's an architect building along a clear plan.

Moreover, look at the remaining candidates - this is not a case of the team starting from scratch. Each of the men still in the running is a former AHL coach of the year. Each has several winning seasons behind the bench and playoff success under their belts. None of these men would be poor choices at the NHL level, and both Arniel and Dineen have both been frequently brought up for other NHL openings in Atlanta and Tampa Bay.

I have a feeling that after Boucher told Howson & Co. that he wanted a few days to decide, Howson likely took Priest and JPM aside and told them exactly what he planned to do, should they be turned down, and who his other choices were in order of preference. He likely got their approval, and has put the candidate of choice on speed dial for just this situation.

The sky is not falling. The team is still the same team that we had yesterday. The franchise is in no greater danger than it was when the news of Boucher receiving the offer broke.

Perhaps the best opinion to seek is one of the Jackets themselves, and for that, I leave you in the hands of Mike Commodore, who shared his own opinion after the news broke:

I'm not concerned at all, Howson knows what he's doing, he'll find someone that fits in well.

In all seriousness, CBJ will be just fine. Howson will hire the right person.

Edit: Just as I was finishing up, reports began surfacing that Scott Arniel is the next man to be offered the position. At this point, I'd call it likely that he will accept the position, but as we've seen, anything is possible.

With Arniel in mind, here are two excellent looks at Arniel as the potential new head coach from The Hockey Writers:

Just in case Howson should need to pull another trick out of his sleeve, we also remind you of our look at Kevin Dineen's potential candidacy, and Dark Blue Jacket's look at why Claude Noel may still be worthy of consideration.

Until the matter is settled and a press conference held at Nationwide Arena to confirm the new coach, the best advice we can give you is to stay calm and don't take any of the rumors too seriously.