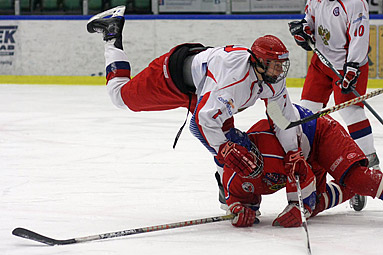 One of the most controversial prospects in the upcoming draft, Kabanov turned a lot of heads when he made the decision to leave the KHL after being traded to Salavat Yulaev Ufa and being told that he would be required to sign a new contract that would not allow him to play in North America. Petitioning the IIHF for a release, he flew to Canada and joined the Moncton Wildcats of the QMJHL, where he began his season at a point a game pace before being sidelined by a wrist injury and apparently falling out of favor with the coaching staff in Moncton, who scratched him for the remainder of the regular season and playoffs once he returned. Kabanov also attempted to play for Russia at the Under 18 World Championships after being released from his obligations by Moncton, only to be dismissed from the team without ever playing a game because of his attitude.

Kabanov may have salvaged some of the damage, however,  with a strong outing at the NHL draft combine in Toronto, including posting the second highest VO2max test and top 10 results in aerobic fitness, wing span, lowest body fat % and curl-ups.

Once thought to be a surefire top ten pick, it's anyone's guess where Kabanov might end up.

Kirill is one of the most talented Russians to come along in multiple years. While the drama surrounding him has been an issue as well as an early-season injury, his skills cannot be ignored. An overall great offensive skill set, his main knock tends to be his penchant for taking bad penalties and getting over-emotional.

Suffice to say, his draft stock has fallen from being a consensus top three pick, to maybe not even going in the first round. NHL teams will have to consider his character in the ever important interview opportunities they have, because there is no doubt that he still has blue-chip talent. He's lanky, but his size is very enticing. Offensively, when he's on his game, he can simply dominate. He sees the ice well and has a very impressive shot, but can also utilize his teammates very effectively. Consistency and intensity are some question marks, and Kabanov has been labeled as a prima donna numerous times, but the sheer skill he possesses can't be questioned.

Why He'd be a Good Fit in Columbus:

It comes down to risk vs. reward. On the one hand, this is clearly a player who has a big ego, a big mouth, and a tendency to fight his coach, his team, and anyone standing in his way if he doesn't get what he wants. On the other, he's got NHL ready size and has a skill level that's been consistently compared to Ilya Kovalchuk and Evgeni Malkin. Columbus has the luxury of two picks in the second round. If - and only if - the coaching staff and front office think they can handle him, perhaps using one of those second rounders to draft Kabanov might be worth the gamble. But if there's even a shadow of a doubt that they can get him to work within the team or the system, let him be someone else's problem.