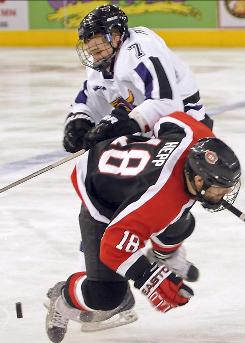 Tyler Pitlick is a center who just finished up his freshman season at Minnesota State. Even though he is listed as a center, Pitlick played most of the season as a wing for the underachieving club. If you're curious as to how underachieving, their leading scorer was a defenseman.

Praised for being competitive and having a high motor, Tyler finished tied for second in goals scored, and fifth on the team in points. He likes to mimic his game after Colorado Avalanche C Peter Mueller. His uncle, Lance Pitlick, played in 393 games as a member of the Senators and Panthers.

He was a finalist his senior year of high school for the "Mr. Hockey" Award, given to the most outstanding senior player in Minnesota. Pitlick is ranked 18th overall according to Central Scouting and could be a late first/early second round pick.

"Dominates faceoffs and in freshman year, is an excellent young prospect, a really good young skater and his ability to dominate a game at his level is truly impressive."

"Tyler has great offensive instincts. And along with that, one of the quickest releases I have coached in 20 years. He’s an extremely competitive kid who wants to be on the ice in critical situations. Tyler has worked hard to develop his game in the defensive end and this is an area he has improved greatly upon throughout the course of the season. He will continue to improve as his body matures. Coming from a hockey family, Tyler understands what it takes both on and off the ice in order to be a successful player."

The typical theme for centers in our prospect profiling has been depth. If we were to draft a center, he would provide necessary depth for our organization. This time its no different. With his offensive senses and developing skills, somewhere down the road he could be a very valuable asset to an organization. If he slides into the second round he would be a smart pick for the Jackets.

The elements are there - he's talented, only to get better as he gets older, he wants to play in all situations, he already has good size. The only flaw I see with him is he's only a freshman, and he'll likely stay in school for a couple more years. That makes me fearful he'll go the way of Teddy Ruth and become "some random player we acquired."

If you YouTube "Tyler Pitlick" you would be surprised with what you'll find - or not. So here he is, showing off his goal scoring celebration. 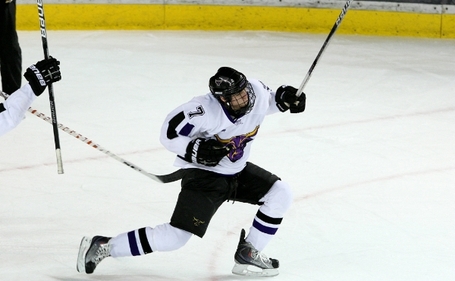