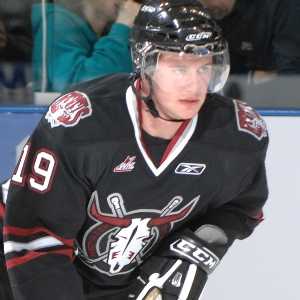 Alex Petrovic is a defenseman for the Red Deer Rebels of the WHL. A solid puck mover, Petrovic plays against the top players in the WHL, according to head coach Jesse Wallin. He's got good size for a kid his age, and he isn't afraid to use it. Drafted in 2007 by the Rebels, Petrovic went fist to fist with Dylan McIlrath in the Top Prospects game back in January of this year.

He likes to model his game after Chris Pronger and idolizes Mike Modano. Alex was the 2nd highest scoring defenseman for the Rebels in 2009/10. Ranked at the 34th spot at the midterm period, he has improved his game to move up to 24th among North American skaters.

"I like him; he's going to be good. I like his on-ice attitude; he's got a bit of an edge to him. He uses his size. He also looks to be a take-charge guy. Every time I saw Red Deer, I'm looking at the 1991s (birth year), but he jumped out every game."

There's something missing in Petrovic's game. Something about him just feels off but I can't put my finger on it. I don't think he will fit in to Columbus' style and what they want to do moving forward. Reports are saying he'll do well in the NHL but I don't see a future with the Blue Jackets.

This is the fight with Dylan McIlrath at the Top Prospects game.