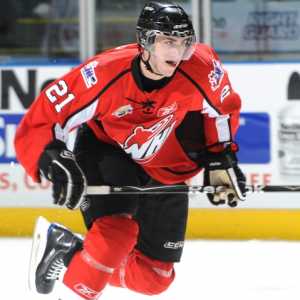 A first round draft pick of the Moose Jaw Warriors in the WHL's 2007 Bantam Draft, Quinton Howden started slow, but quickly picked up the pace in the 2009-2010 season, more than doubling his point production from the 30 points he had in his rookie season and boosting his +/- from an abysmal -37 to a respectable +14 this year. Playing for both the WHL's Team West and Team Canada's U-18 squad, Howden shows a great deal of potential if he can continue to grow into his body and improve his play away from the puck.

Quinton Howden may be the most effortless skater in the WHL right now.  His fantastic acceleration often provided his defensemen with a great outlet option.  It also aided his transition game in the neutral zone where he was very effective in back checking and then turning the play back up the ice. Howden could stand to benefit by showing more patience with the puck, allowing time for his teammates to join in and help him.

Why He'd Be a Good Fit In Columbus:

If Columbus somehow found themselves with a late first round pick, Howden's an interesting player because he could potentially become another big power forward to put into the team's top six. With his skating skills, scoring ability, and speed, he could easily become a dominant power forward able to rush into the zone and crash the net. (The temptation to compare his skillset to a less polished Rick Nash is obvious.) Even better, Howden seems to be spending his junior career identifying his weaknesses and working to correct each one as he goes, raising the level of his game in the process. He'll likely be a player to watch in the WHL and at the World Junior Championships for Team Canada next year.