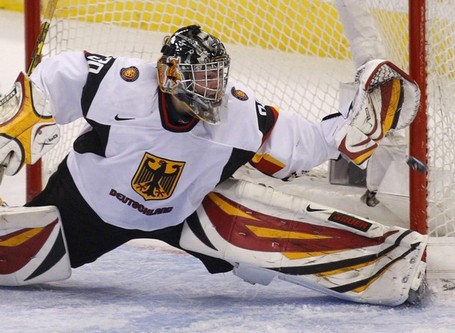 After starting the 2009-2010 season with the Belleville Bulls, Grubauer was traded to the Windsor Spitfires where he took over the starting role, leading them to their second consecutive Memorial Cup. Of his 15 losses in the regular season, only one occurred in net for the Spits, and his GAA went from a 3.14 to a 2.37 over the course of 19 games. The starting goaltender for Team Germany at the WJC, he helped the Germans to victory over Group B, putting them back into Group A for 2011. Likely to be drafted late in the second or third round, we've projected the Jackets to take a shot at Grubauer with the 55th pick in our SBNation Mock Draft.

Unfortunately, because of Grubauer's low draft position, most scouting reports are behind a paywall. The consistent themes are his technical skill, calm style of play, and ability to perform under pressure. He's solid - not as flashy or technically brilliant as some of the goaltenders ranked ahead of him, but he shows every sign of being a consistent, steady presence in net as he continues to developed.

Though Columbus' goaltending pipeline is reasonably solid, it never hurts to keep acquiring good talent to develop just in case. The Jackets have a habit of drafting at least one goaltender in the middle rounds of the draft, and with an extra pick in the late second round courtesy of the Raffi Torres trade, it's a good fit.