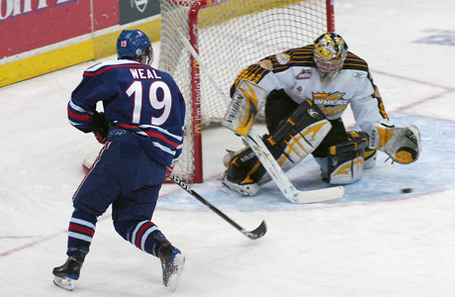 The first 17 year old in over a decade to break 100 points in a season in the Dub, Jordan Weal has been playing for the Pats for two full seasons now, centering Edmonton Oilers prospect Jordan Eberle. Though many scouts say his size is a problem, and will likely keep him out of the first round, his speed, skills with the puck, and creative playmaking ability make him a constant offensive threat. He also clearly needs to improve his defensive play, but that can be developed with the right coaching. If he can put on a bit more muscle, or show that he can adjust to playing against adults as well as he's been tearing up the WHL, he could easily be a future top six center in the NHL....just ask 5'10, 180 lb. Danny Briere.

Unlike a lot of small skilled forwards that thrive at the junior level by using their speed to score off the rush, Weal prefers to do most of his damage by maintaining puck possession in the offensive zone, circling and cycling along the half wall until he finds an opening to dart into. Much like Eberle, Weal is a diminutive, shifty, intelligent player that does not possess blazing speed and prefers to slow the game down in the offensive zone where he can dissect the defense in order to generate scoring chances. Weal is predominantly a playmaker and while he doesn't have a particularly hard or accurate shot, it is effective when he uses his cunning and quick release to fool goalies. Due to his size, Weal likely won't be picked early in the first round of the 2010 draft but his skill, intelligence and focus making him an intriguing pick for the upcoming draft. With his ability to read defenses, Weal will likely be sought after by a team looking for some help on the powerplay.

Flaws/Aspects He Needs To Work On:

Continue to train to increase strength and mass will be all the more crucial given his frame.
Defensive zone play
Take skating and quickness to the next level.

Why He'd be a Good Fit in Columbus:

As I write this, the Jackets blogosphere is all abuzz over rumors of possibly getting Jason Spezza or Marc Savard in a trade - a skilled, aggressive playmaker who can put up 70-80 points in a season. Weal could well become that kind of player. He has the talent - the main question is if he can raise his game against bigger and stronger opponents, and I think it's a gamble that's worth taking, especially considering the organization's weaknesses down the middle.