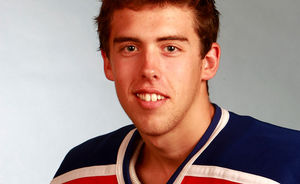 In this year's 2010 SBNation Mock Draft, with Cam Fowler off the board, we've made the decision to go with Moncton Wildcats defenseman Brandon Gormley.

The biggest need in the Jackets' prospect pool is for players who can execute the up tempo puck posession style that new head coach Scott Arniel is putting into place. Though Eric Gudbrandson has a bigger physical edge, it's Brandon's well rounded skill set that caught our eye - he's excelled in every situation for the Wildcats, and his hockey sense is unparalleled - he was a constant shorthanded threat for Moncton, able to break up passing plays and get up the ice when the opportunity presented itself.

Even better, the CBJ have had the opportunity to take a long look at Gormley because of his teammate (and defensive partner) David Savard. This is a player who they will know inside and out before he comes to the podium - possibly giving him a bit of an edge going into prospect camp.

In case you didn't see our Draft Prospect Preview of Brandon, here's his key stats from last year:

Here's the breakdown on Brandon from HockeyProspect.com:

After a solid first season with Moncton, Gormley improved his offensive numbers this season. Quite solid in all zones, his skating is superb, with a strong and smooth stride. He's not exactly a puck rusher, but he makes the right pass - Gormley isn't an intimidating physical presence, but he is incredibly smart. He knows how to position himself and always makes the right play.

His shot and ability is especially helpful on the power play, where Gormley is a very capable quarterback. Overall, Gormley is a player that has a ton of poise and confidence in his game. His skating ability and intelligence leaves Gormley with a lot of potential.

Now you've heard what we think - so let's hear from you: