The Man They Call Dino

Share All sharing options for: The Man They Call Dino

A little over a week ago, Dark Blue Jacket challenged the Blue Jackets blogosphere to really dig into the candidates for the head coaching position. With DBJ himself already taking a look at Hamilton's Guy Boucher, I started sending out feelers for into on the other three candidates, with varying degrees of success. Fortunately, others have also taken up the gauntlet.

In my case, though, I finally struck a bit of gold recently in talking to some Mainers up there in Portland about Kevin Dineen, the man pushed as the favored candidate by the Columbus Dispatch and many of the mainstream hockey media. Though many are pushing Dineen because of his gritty play on the ice and a warm, fuzzy feeling towards the inaugural Blue Jackets, I'm hoping I can help shed a little more light on Kevin Dineen the coach. Hopefully this, combined with more efforts from other Jackets bloggers (like the one DBJ posted as I was working on this) will help Columbus get a little more informed on the man they call....Dino. 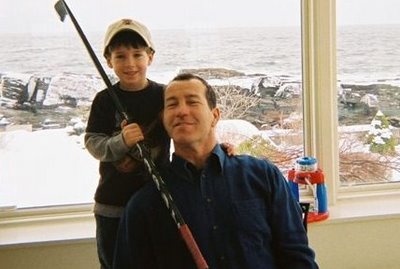 In trying to learn more about Coach Dineen, I found two excellent resources: Chris Roy, of the Maine Hockey Journal, and Dan Hickling, Portland Pirates beat writer for the York County Journal Tribune. I'd like to thank both of them for their help and their insights in putting this article together.

I asked each for their thoughts on Dineen, starting with the most basic: "What kind of a coach is he?"

Dino isn't what I would consider a nuts and bolts type of coach - If I had to put a style to his game, he coaches much like Randy Carlyle in Anaheim: Goalie, Big D with top-6, lunch pail line, and then toughness line. He's a motivator who gets the most out of his players..but he can wear a player out to the point they stop listening. That said, he's got players that will give their life for him so it really comes back to the player.

His way with his players is unlike any other I've seen from an AHL coach in the 17 years I've spent covering that league ... Somehow, he is able to get his players to play the game the way he played it (completely sold out to the process) ...  his teams for five years (with two different organizations) have a common thread, they compete hard all the time, the skill players as well as the pluggers, and guys show noticeable improvement as time moves on.
That's why pluggers such as Ryan Carter, Andrew Ebbett, and Tim Kennedy can find their way to the NHL and enjoy success ... you expect guys like Bobby Ryan, Tyler Ennis, Ryan Getzlaf to get there, but he has a way of getting the journeymen around them to play above their heads, which in turn gives the bluechippers someone to play with, and better hones their skills ... players love playing for him (you can ask them, as we have) ... I don't think it would be any different for him if he was behind an NHL bench ...

It's not surprising that someone who played 18 years in the league as a hard charger and leader of men (Capitan in Philly, Hartford, and Carolina, and arguably should have had the title in Columbus over Lyle Odelein) would demand hard work and know how to light a fire under his players, but it's interesting to see both the positive and negative side effects. While I doubt that the team would be risking a team-wide "tuning out" as Ken Hitchcock suffered, it still would be a possible concern for the front office should Dino get the nod.
Dineen was also known as a very passionate and intense player, and it seems that passion still drives him - though it can also cause problems behind the bench, which Chris pointed out when asked about how he handles himself in games:

Behind the bench, he'll yell and scream on the bench at times, to his players, and to officials on the ice. He has a history of going overboard. He's thrown water bottles at officials, clipboards and most recently he was suspended for a game because he went ballistic after a goal -- which was a goal -- was disallowed.

I'm of a mixed opinion - on the one hand, the manager/coach blowup is a something of a hallowed tradition in minor league sports, and often much more tolerated than in the top levels of a game, but the emotional involvement required to have such a blowup speaks to how the coach can get into the game as it takes place around him, and the drive to succeed. It's certainly a change from the more phlegmatic styles of Gerard Gallant or Ken Hitchcock, or the Zen Master approach of Claude Noel's interim tenure - perhaps a way to help keep a fire under the Jackets in games, particularly since they've been accused of being a 40 minute team more than once in the past.
I also wonder if perhaps some of Dineen's blowups behind the bench might also be shaped by the organizations he's worked for - Randy Carlye isn't what you'd call the world's most stoic head coach, either, and Lindy Ruff...well, who can forget his furious throwdown with Bryan Murray a few years back?
I suspect that in Columbus, we'd still see that passion - and that temper - but it's likely that Dineen would know that he'd be expected to moderate it in the NHL, particularly with the reminder of his recent suspension to help leaven his reactions. 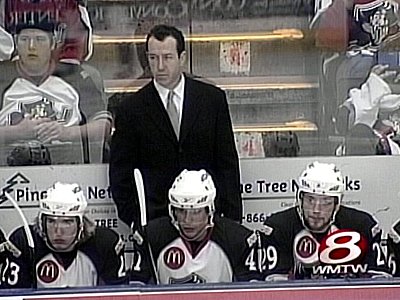 Another area I was curious about was how Dineen worked in the community - as head coach of the Jackets, Dineen would likely be asked to get involved with the Blue Jackets Foundation and its' many programs around Columbus to promote charities and community service.

Dineen's no stranger to charitable causes - a victim of Crohn's disease, he has spent much of his NHL and coaching career working with the Crohn's & Colitis Foundation of America as one of their spokespeople - but it's one thing to cut a few PSAs every year, and another to invest into the community 24x7.
Dan:

In the community, he's become something of an icon, if for no other reason than because he's been here for five years, but the big thing is that he and his family have embraced the Portland area, and make no secret of that. It's also the reason why he can be very choosey about what NHL job he takes - if there is any such thing as job security in the AHL, he has it.

Dineen is wonderful in the community... He's very involved especially in the town that he currently lives in here in Maine. His kids are active and his wife is active. He can be seen playing in certain charity golf games, or taking part in other events.

I have no doubt that Dineen, should he be named to the position, will find his way into the community's heart quickly if he keeps up this level of involvement. 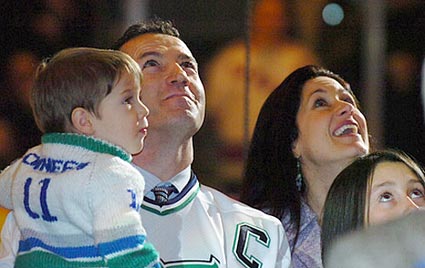 Finally, I asked one more question, spurred by Dineen's evasion of a Channel 6 reporter a few weeks ago:
How does Dineen handle the media?
Dan did not answer, but Chris had a take that made me very thoughtful:

From a media standpoint... I'm not convinced that he's ready to make the jump. That's my opinion based on working with him for the last five years. He's rough when it comes to dealing with the media and he can be very passive as you can see with him avoiding the media during the interview process.
At the end of the day, I think the job is his, but I would caution people with their expectations - it will be a learning process with both the team and Dineen.

This is a pattern I've found in trying to research Kevin - for a relatively public figure, he tries to keep an extremely low profile, with very little being discussed in the media, almost no interviews, and a continued attempt to avoid the spotlight. I'm concerned with how he may adjust to the microscope of an NHL job, particularly in Columbus. Thanks to the media coverage devoted to the team from the Dispatch, bloggers, Fox Sports Ohio, and the national hockey media, avoiding the spotlight will be almost impossible, and simply attempting to out-jog a beat writer is not going to work very often. Combine a reluctance to speak with the media and Dineen's noted temper, and you have to wonder if this might be a rather volatile situation in the making. 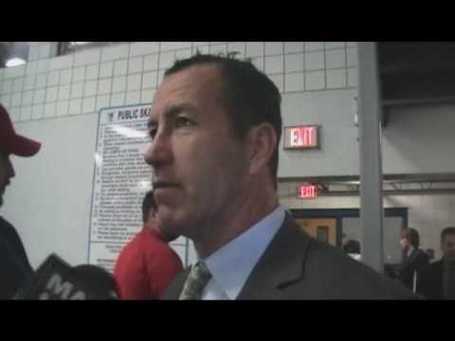 With Scott Howson announcing that the coaching search will be settled in the next 7-10 days, before the NHL draft, the question of who will step behind the bench will be answered sooner than later. If it is to be Dineen, it's likely to be quite a ride for the Blue Jackets and their fans.

My thanks again to Chris and Dan for their input - I hope that if I haven't answered all the questions from those looking to learn more about Kevin Dineen, I've at least helped create some new questions. As the coaching search comes to a close, please keep coming back to The Cannon, where we'll be discussing the news as it breaks!