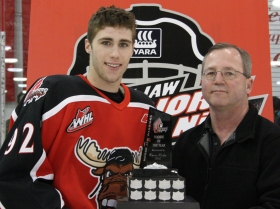 This big bruising d-man was the 3rd leading scorer among defensemen for the Moose Jaw Warriors during the 2009/10 season. He plays a very old school, physical game, and he has great offensive ability. They don't call him "Big Mac Truck" for nothing. His scoring touch can be explained because he played as a forward until he was 13 years old.

In his first two seasons with the Warriors, he racked up an impressive 271 penalty minutes including 19 majors. McIlrath improved from the 27th overall prospect, to the 17th overall. He could be a star in the league in his rookie season.

"Big and mean, old-time typical NHL defenseman. He scares people not only with some frequent fights he might get in, but with 6-4, 212 lbs. straight ahead speed and offensive ability to match. Often, and in a very complimentary sense, makes puck carriers cut to the other side of the ice with his intimidating size."

I'll be honest, I've never read a scouting report on a junior player that calls him "scary and intimidating." He could be the kind of guy the Jackets want as a true enforcer. With his scoring touch, it makes him an even more impressive prospect. I don't think he will be drafted by Columbus, but his style would be great for our team. He could also fit in with Philly, given their reputation for playing tough and gritty.

McIlrath doesn't even need to see you to knock the bejesus out of you (see - :32)