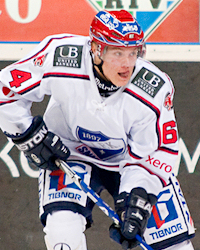 A skilled playmaker with a good scoring touch, Mikael Granlund is currently playing for HIFK in the Finnish National Leauge, where he's gotten off to a fast start, posting a 40 point season in his first year in professional hockey after lighting up the Finnish Junior league for 57 points (21 G, 36 A) the season before. The top rated European skater by NHL Central Scouting, the biggest concern on Granlund is his smaller size. After winning bronze with Team Finland in the World Juniors in 2009, his 2010 WJC was a bit of a disappointment (1G, 6A), which could affect his draft position.

While he is definitely undersized by NHL standards, his size is not a major concern given his exceptional level of talent. He’s a very good skater and has great agility which he uses to advantage. Like Pulkkinen, he’s a bit of a stick magician as well and has a tremendous repertoire of moves. Granlund is definitely a playmaker first and foremost, as he sees the ice pretty well and can definitely create a lot of quality chances for other players. But he still has a pretty good wrist shot and can put the puck in the net when need be. Another thing to really like about Granlund is that for being undersized, he competes pretty hard on the ice and is willing to battle.

Centre continues to be a position of weakness for the Blue Jackets - one which they have not been able to address through the draft in the Howson era. While his size is a concern, his paramount skill could make Granlund attractive if Howson feels he can fix the team's blue line issues through trades, possibly swapping first round picks to set up a deal on the blue line, then snagging the Finnish forward later in the first round.