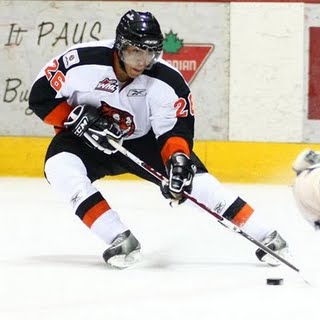 Emerson Etem is a Right Winger playing for the Medicine Hat Tigers of the WHL. This guy is a player. He was the second leading goal scorer on his team, while being tied for the 4th in points. Etem is already being praised for his professionalism and work ethic.

Tigers Head Coach Willie Desjardins is quoted as saying "His biggest strength is he wants to improve as a player. When you tell him something he is prepared to do it."

He's spent the last three offseasons training with the likes of Mike Comrie, Chris Chelios, and our very own Mike Commodore. Why he trains with two defensemen is anyone's guess. Etem is the 8th ranked North American skater, 4th among North American forwards.

"A 37-goal scorer with a good Medicine Hat team. He handles the puck so well at full speed. His crouch style belies his 6-foot stature. He looks smaller out there on the ice, but he's not small in productiveness. How about this -- he moved from Long Beach to Minnesota's Shattuck-St. Mary's to Medicine Hat, Alberta, all in the space of three developmental junior years."

Etem can add yet another scoring touch to the glut of young wingers on our team. Much like Nino Niederreiter, he would look very good playing alongside Jake Voracek. If the Jackets are looking at the forward position if Nikita Filatov gets traded, Etem could be a steal.

This short clip is of Etem scoring at the Top Prospects Game. Enjoy.