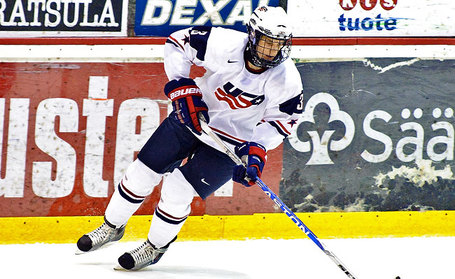 Forbort moves the puck very well and that has earned him a spot on the U-18's powerplay squad. Forbort has taken full advantage of his chance, gaining 6 points on the PP from the point this season...incredible balance skating backwards, and also has the unique ability to anticipate a shot or pass on an odd-man rush. Once the opposing team gets set up in the zone, he can get down and block shots, and get into the passing lanes with his poke check to break up plays single-handedly. On the penalty kill, Forbort can do multiple things for his team. He can be aggressive and get the puck to clear to help his team kill of the penalty...he almost never misses an opportunity to block a shot and he's not afraid to get dirty and clear out the front of the net. These defensive skills, plus his offensive skills, combined with his size (6'4"/195), make Derek Forbort a very intriguing NHL prospect

Judging by his play with the US National Development Program, Forbort has a rare combination of defensive responsibility, great skating ability, and size. Though Cam Fowler and Erik Gudbranson are generally regarded as the top defensive prospects in the draft, Forbort has crept into the conversation, and could be an interesting pick if Howson felt like gambling a bit with the #4 selection. (Red Line Report, in fact, recently ranked Forbort ahead of Fowler and Brandon Gormley.)  The #11 ranked North American skater by NHL Central Scouting, and top defensive prospect from the USHL, every report I've read projects him as a future top pairing NHL defenseman. He is not a pure puck mover, but should he continue to fill out, it's easy to see him developing into a Chris Pronger or Mike Komisarek type player.

No videos this time around, gang. Accept instead a touching story of Derek learning how to play on a backyard rink from Minnesota Hockey Pulse.