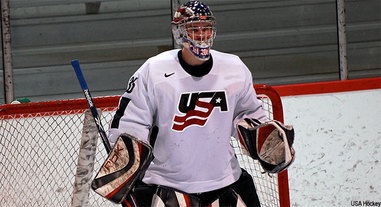 Jack Campbell is a goaltender for the US Nation Team Developmental Program in the USHL. Campbell is the 2nd highest rater goaltender amongst North American players. In November of 2009, Jack had de-committed to the University of M*chigan to jump to the OHL where he signed with the Windsor Spitfires. In my most humble opinion, I love that he opted not to go to college at that school.

Campbell has decent size, but he still needs to fill out his frame. He’s got very good reflexes and he’s extremely quick in his stance. He also has the ability to make great recovery saves if he is ever caught out of position. One of the other aspects that Campbell really excels at is puck handling, as he is extremely good at that aspect of the game. Campbell has also been praised as being extremely competitive, and as a player that strives to improve his game. With goalies, there is always a significant amount of work to be done in regards to improving their technical components of the game, so having a goalie that wants to improve is a huge plus.

As Matt pointed out in his last prospect profile, depth at the goalie position in the organization isn't exactly deep. With LaCosta probably leaving to play elsewhere, and Wesslau coming in to play with LaLande, Campbell could be another young up-and-coming super goalie. His speed and reflexes remind me a lot of our own Steve Mason, and lets face it, thats a good thing. When you hear about how well is puck handling is, one of the first goalies you think of is Marty Turco. If he's nearly as talented as that, he'll be a special player in the league someday.

Here is Campbell making saves and taking part in a post game interview after the USA's victory over Canada in the U-20 World Championships.