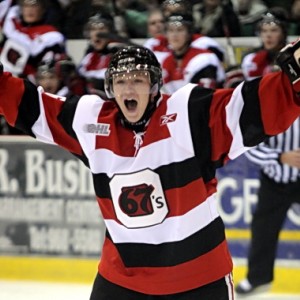 Tyler Toffoli is a center for the Ottawa 67's of the Ontario Hockey League. A real player in the OHL, he averaged better than a point per game in the 2009/10 season. He was the second leading scorer for his team. When entering the OHL he was drafted two spots ahead of Tyler Seguin. In an interview with NHL.com, he lets us in on some of his "favorites."

Goal celebration: "Whatever comes to mind"

He is ranked 16th among North American Skaters according to Central Scouting.

"Is not very big in stature for his Ottawa team, but he makes up for that in skill and effort. He's got 79 points in his 65 games played. He's got an NHL release and incredible accuracy with his shot. An equal threat whether he's dishing the puck or shooting the puck himself."

I could see Columbus drafting Toffoli but not with the #4 overall pick. His size is a bit concerning, but he's still growing. The most intriguing part about him is his shot. His coach gave him a lot of credit for being able to create and finish plays. The center position is a concern, as we all know, and his playmaking ability could elevate the Columbus Blue Jackets, but I don't see him being drafted by Scott Howson.

Toffoli taking on Adam Sedlak of the Peterborough Petes. This is the first time I've ever seen a fighter try to pick up, and body slam his opponent.