One of the fastest risers in this year's draft, Jarnkrok has almost come out of nowhere to become a high-value prospect. Many professional and armchair scouts have fallen in love with this guy. He started the season with Brynas' (Sweden) junior squad, but made the move to the SEL full time. He is a playmaking center who reminds of Marc Savard. Jarnkrok has a ton of bulking up to do but setting up line mates on a consistent basis is his bread and butter.

Jarnkrok has seen his stock progressively rise this season after having a smooth transition to Brynas' Eliserien squad. He's very slight, which is a concern that scouts will have to assess, but his offensive skills are undeniable. He's one of the better playmakers in the draft, and has received high praise from many in Sweden. Like Bennett, he could even sneak up a bit higher in the draft depending on the team.

I would be a happy fan if the Jackets were able to snag Jarnkrok in the second round. He may go higher, but if he slips he could be a valuable asset. He would add much-needed depth at center, and he could push Derick Brassard for the role of Nash's setup man. 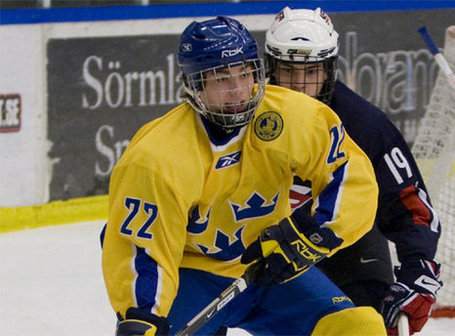