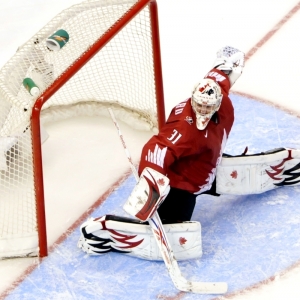 Playing more minutes (2704) than any other goaltender in the WHL, Pickard has become a player that the young T-Birds can rely on for solid goaltending on a night in, night out basis; a fact that is proven by his ability to keep his team in games that they seem to have no business playing in. Positionally sound, and also with very strong rebound control, you don't s ee Calvin give many soft goals, and he seems to bounce back very quickly after being scored on; a testament to his mental ability.

While the goaltending in Columbus appears fairly set for the near future with Steve Mason and Mathieu Garon,
the pipeline isn't what you'd call stuffed with blue chip prospects. Scott Howson has already made one move,
the signing of Swedish goaltender Gustaf Wesslau, to continue providing talent at the position. Pickard, the #1 ranked North American goalie according to NHLCentral Scouting, would provide a solid technician with a great deal of mental toughness, something this team has occasionally found lacking.

Pickard in Action:
...was surprisingly difficult to find, actually. Despite playing 2 years with the Seattle Thunderbirds, backstopping Team Cherry to a 4-2 win in the CHL top draft prospects game this spring, and playing in the World U18 championships with Team Canada, there's more footage of Calvin sitting down to interviews than playing the game, or footage of his brother, Chet Pickard, a 2008 selection of the Nashville Predators. However, I did find a highlight video from Seattle's 12/11/09 game against the Tri-City Americans that features Pickard making some nice saves at the 1:20 mark. Enjoy!