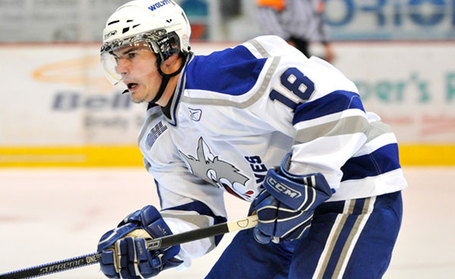 The #1 pick in the OHL's 2008 entry draft, John McFarland came to the Sudbury Wolves with a lot of expectations, having torn through the OPJHL with 96 goals and 68 assists in 46 games. Since then, his star has fallen a bit - after many thought he would be in the top ten, he's settled into a lower tier. Though some of his reduced scoring can be put down to injuries, there are a lot of questions about his production dropping once he reached a higher level of competition, and concerns about his on ice judgement and work ethic - many  scouts are concerned that he isn't applying his full effort.

McFarland came into the season with very high expectations, and failed to live up to them after a mediocre showing. Despite what many would consider to be a disastrous year, McFarland is a player that plays a lot better with high caliber players, leading to the notion that he might actually be a better professional player, then in the OHL. He’s got NHL speed, and an NHL shot, but his lack of hockey sense and poor positional play will be the biggest detriments to his development.

McFarland has a lot of tools that are going to be very attractive to NHL scouts. Namely, he’s an incredible skater, maybe a step behind Taylor Hall, but very close. He’s got an NHL shot with a great release, although he needs to use it more. Also despite not being extremely tall, he’s already got NHL ready size. While that sounds enticing, there is cause for concern. McFarland’s positional play definitely leaves something to be desired as he often is out of position in his own end and loses positional matchups. He also doesn’t see the ice very well and struggled to develop any real chemistry with any of his line-mates. One of the other things that McFarland needs to improve on is getting to the traffic areas on the ice. Often times he settles for outside shots as he seems to be driven towards scoring the glamorous goals instead of just crashing the net and getting a few ugly ones as well.

Well, actually, much like Mike's look at Jeff Skinner, I have my doubts about McFarland as well. On the one hand, it's clear this guy has offensive talent and great skating ability when he chooses to use it, and the general sense is that the better the talent is around him, the more he commits himself to playing on the ice. On the other hand, Columbus has had a lot of history with players who may or may not show up in games, and the lack of desire to go into the hard areas of the ice bothers me.

Finally, on the gripping hand, there is the "lack of on-ice judgement" that TSR mentions. I had to look to find highlights of McFarland scoring - but there's plenty of videos of him getting into on-ice scraps. (Notice the 70 PIMs this season) - all the talent in the world can't help a team if it's sitting in the penalty box after an ill-advised fight. Perhaps, if McFarland falls further, he might be worth a look. Columbus does have an additional second round pick this year thanks to the Raffi Torres deal. I might be willing to take a chance on McFarland if he's still around by the 55th pick.