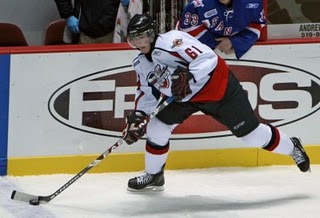 A promising and skilled scoring forward who had originally committed to play for Maine in the NCAA, Austin Watson changed his mind and went the Major Junior route after being drafted by the Windsor Spitfires of the OHL. Stuck behind guys like Dale Mitchell, Greg Nemisz, and Justin Shugg on the Spits' depth chart, Watson changed his game to become one of the best defensive forwards and shot blockers in the OHL, playing an important role in their run to the 2009 Memorial Cup. Stuck in the bottom six, he welcomed a chance to be traded to Peterborough for Zack Kassian, where he would get a chance to prove himself with a bigger role on the team.

Though an ankle injury in the CHL top prospects game caused him to miss much of the second half of the season, he returned to the Petes in time for the playoffs, scoring two goals in their first round exit, then followed it up by joining Team USA in the U18 World Championships and playing a big part in the defeats of both Team Canada and Team Sweden on their way to a gold medal, raising his draft stock considerably.

Watson is a decent skater with good hands and offensive ability, but has shown himself to be a well-rounded player in the OHL who can play effectively on special teams. A solid citizen, he is coachable and puts the team first. He got a rousing ovation from the Windsor faithful when he was introduced at the top prospects game, even though he was already a member of the rival Petes. Fans are usually a pretty good indicator of a player's worth; when someone ceases to wear the colors and hooks on with someone else, it's saying something when they embrace the former player like the Spitfires fans did for Watson.

Did you ever hear the story about the grasshopper and the ant when you were a little kid? The complaint of the grasshopper about the ant was, "All he ever does is work!" That's what I keep thinking about when I look at Watson. He's got good hands, but not exceptional. He's got good skating ability, but he won't make a move and disappear on the defense. He can't blow you up and take you out of the play with his body. But he works, and works, and works, and works. He's not afraid to block shots, he's not afraid to get into a scrap, he's willing to pay the price to make a play and he'll go like hell when you give him an opportunity - in those 10 games after coming back from his broken ankle, he racked up 20 points! Several of the scouting reports on Watson compare him to Jordan Staal, and I think that's a fair comparison. Should Watson drop back into the second round, or the Jackets choose to move back in the first round as part of a draft day deal, I wouldn't sleep on this kid.