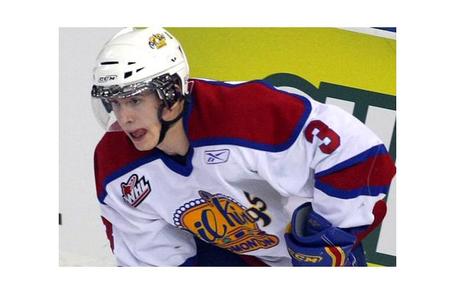 Mark Pysyk is a defenseman for the Edmonton Oil Kings of the WHL. He is yet another player to have his season cut short due to injury. A broken foot caused him to miss 24 games this year. His toughness isn't in question however - Pysyk played a handful of games on the broken foot before being shut down.

He is already drawing comparisons to Duncan Keith, so take that for what its worth. Pysyk is currently the #7 overall North American skating prospect, after improving on his #9 midterm rank.

"He finished the season with a broken foot and a lot of scouts weren't able to get a good grip on how good this player's going to be in the NHL. Smooth-skating, he has a neat knack for following up the play at the right time, leading the rush at the right time and throwing a crisp pass to one of his forwards to break out of his zone."

Why he would fit in Columbus:

Pysyk would add another right handed shot to the lineup in a defensive corps that is predominantly full of lefties. He's a very fluid skater for his size and has good speed and agility. He's a special teams specialist, who can get lots of time on the PP and PK. He's good at killing penalties, which we've addressed is a huge need, and he can make great outlet passes to our forwards.