As the Blue Jackets prepare for the 2010-2011 campaign, everyone from the Dispatch beat writers to the waitstaff at the R-Bar has commented that GM Scott Howson needs to make moves to fix the team's defense. Built to the requirements of former head coach Ken Hitchcock's defensive system, the team was exposed several times by faster, more agile clubs who could deny the defense the ability to clear the zone, or skate through their attempts to construct a trap and get good scoring chances. Worse, the CBJ blue line was unreliable offensively, with only one player, Anton Stralman, cracking the top 40 scorers among defensemen with 34 points and a -17 +/- rating (at #40, no less).

While it's uncertain exactly how the blue line will be changed (particularly with players like Rusty Klesla, Mike Commodore, and Fedor Tyutin on relatively new contracts), many have speculated that the Jackets might look at trading picks, players, and/or prospects at the upcoming NHL draft to grab a proven veteran, like Toronto's Tomas Kaberle, possibly look at an unrestricted free agent like Sergei Gonchar, I'm not sure that really fits the sort of moves we've seen Howson make, so far. He's tried to look for players in their mid to late 20s, usually either on a reasonable contract or coming into RFA status, and made fairly reasonable trades to acquire them.

Keeping that in mind, I've tried to look for some possible candidates from the RFA pool... 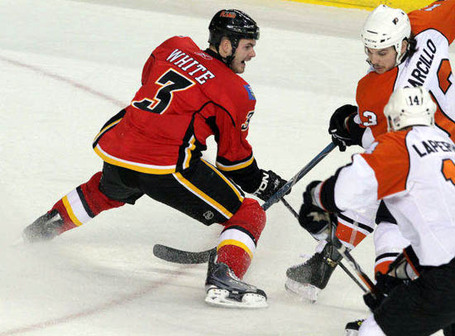 Part of the recent Dion Phaneuf trade from Toronto to Calgary,  White put up 13 goals, 25 assists, and a +8 rating between the Leafs and the Flames this year, averaging 22:47 TOI. Though it might seem strange to think the Flames would be willing to trade him after giving up Phaneuf, White didn't really seem to click with Calgary, scoring only 12 points (4G, 8A) following his trade up to Alberta. Currently making $950,000, it's likely that he'll be looking for a pay raise, and Calgary is already at $54.8 million* against the cap for next season, while needing to re-sign or replace 5 of their NHL level forwards and backup goaltender Vesa Toskala, who will be a UFA in July. In addition, White is the only pending free agent on Calgary's blue line, and the Flames might also consider providing themselves cap relief by bringing up a less expensive prospect to take his slot, like John Negrin, Josh Meyers, or T.J. Brodie. 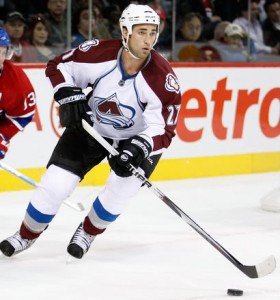 One of the more up and down players from the Avalanche's remarkable run this year, Quincey has been something of a journeyman, going from the Red Wings to the Kings to the Avs in the last three seasons. When he's good, he can be a credible threat on the blue line, posting a 38 point season in 2008-2009 with the Kings that included 2 power play goals and 25 power play assists. On the other hand, when he's bad, he can disappear in games, or worse, become a defensive liability. It's clear that he'll need some careful handling,  but it's also clear that there's a lot of untapped potential. Quincey is coming off a 29 point campaign (6G, 23A) with a +9 rating and a 23:36 average TOI, but the general consensus is that he seemed to lose confidence and fold up in the second half of the season, disappearing in the playoffs with no points, a +2, and 8 PIMs.

While I'm not totally certain Colorado will want to part with Quincey, they are in a position where they need to rebuild much of their blue line, with Adam Foote, Ruslan Salei, Brett Clark, and Derek Peltier all at the end of their contracts, and Scott Hannan, Kyle Cumiskey, and Ryan Wilson all up next year. An offer of a player like Klesla, a known quantity signed to a reasonable deal at a good term, might be preferable to gambling that Joe Sacco can continue to bring Quincey out of his shell. 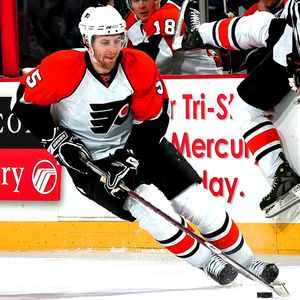 After being moved to the Flyers for Alexei Zhitnik back in 2007, Coburn seemed to have a breakout year in 2007-2008, posting 9G 27A and a +17. Since then, he's come back to Earth a bit, posting a 28 point season in '08-'09 and a 19 point season in '09-10. Perhaps he simply hasn't meshed into Philly in the long term, particularly with the switch to Peter Laviolette's system. Interestingly enough, near the end of the season, Philly GM Paul Holmgren stated that he'd sent Coburn's agent a contract for a 2 year extension, and Coburn's agent didn't feel the offer was worth forwarding to his client. If what Coburn really needs is a change of scenery (and really, has getting out of Philly ever really been bad for anyone?), perhaps the Jackets can offer Coburn a clean slate in hopes of bringing him back to his 2007-2008 form. 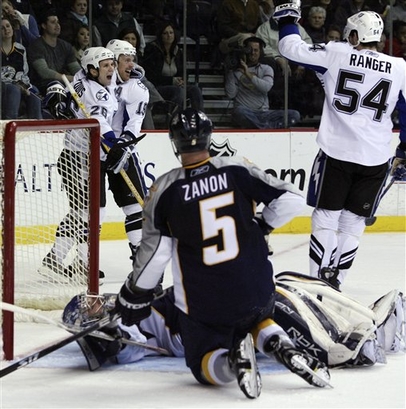 A skilled puck mover who lost nearly half of the 2008-2009 season to a shoulder injury, and has been on an extended leave of absence from the Lightning for most of the 2009-2010 season, Ranger has clearly been dealing with some serious off ice issues, but is another possible diamond in the rough if he is ready to play for the 2010-11 season. Ranger's last full season of hockey (2007-2008) saw him put up 10 goals and 21 assists in 72 games, while averaging 18 minutes a night. Considered a top 4 d-man by pro scouts, if Ranger is interested in continuing his career, I'm betting Howson could engineer a trade from Tampa in exchange for a late draft pick and then secure Ranger's services with a deal near the leauge minimum. It's certainly possible that he might not pan out, but he seems like just the type of low risk, high reward move that saw Jan Hejda become such a valued member of the team. 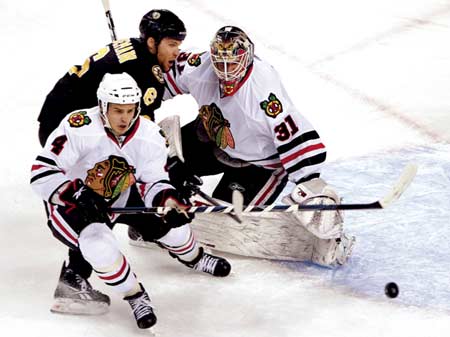 While I've no doubt that quite a few people were expecting me to mention a player from the Blackhawks, given their rather atrocious cap situation, I have a feeling that when I say Hjalmarsson, most of you are saying "Huh?"

This is his first full pro season, after coming up at least year's trade deadline and a few games in 2007-2008. The big Swede (6' 3", 205) has been an excellent physical player, pairing well with Brian Campbell and balancing the ability to deal some truly bone-crunching hits with excellent defensive judgement and quick, powerful strides when he skates that let him charge up the ice and out of the zone. Though his offensive numbers aren't quite as high powered as some of the other Chicago blueliners (2 G, 15A), he's still a +9 and averaging over 20 minutes TOI a game, and has continued to play big minutes into the Hawks playoff run. Not bad at all for a relative rookie.  He's a utility player that seems to be able to do a bit of everything, and do it well, and at 22, he's still developing into his prime.

Chicago may not want to trade him, but they're also going to be having difficulty finding the money to pay him, and I suspect that if Howson wanted to fax his agent an offer sheet, he might be able to obtain Hjalmarsson for as little as a third round pick. Given that Hjalmarsson currently makes $685,000, a raise up to $1.8 million per year would be a reasonable boost for his next contract, and might put him above where Chicago feels comfortable matching.

So, there you have it - while I am painfully short on crystal balls and winning lottery numbers, I think these are the type of players we could see brought in to help remake the CBJ defense. Tune in again next week when I'll try to apply the same logic to the Centre position to see if we can't find a few more potential candidates.

*All team, player salary, and cap numbers are from http://www.capgeek.com