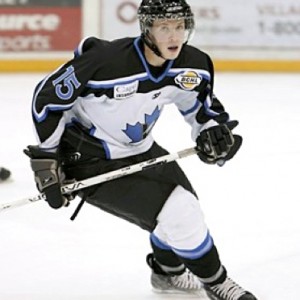 Ryan Johansen is a center for the Portland Winterhawks of the WHL. He's a teammate of fellow draftee Nino Neiderreiter. He ranked fifth on the team during the 2009-2010 season in goals (25) and finished 2nd in points (69).

Johansen is the 10th rated North American skater according to Central Scouting. He's already being praised for his work on both ends of the ice. His idol is Sharks C Joe Thornton. Not a bad choice, if you ask me.

"He has good on-ice vision and also angles well on the forecheck. He has the intelligence to play power-play as well as penalty kill. He can be shifty and has the ability to beat a defenseman one-on-one. Once he fills out and gains more strength he could turn raw talent into a valuable center at both ends of rink. He has displayed nice playmaking capabilities and this should continue at the next level."

The center position is the big concern after the blueline. If there is any uncertainty in the future of Derick Brassard, Johansen could be the Blue Jackets next draft pick. I could see Ryan playing on the second line with Voracek and Umberger. He has very good size to even play on the checking line if Pahlsson finds his way moving up or down in the lineup.

This is Johansen scoring his first career short handed goal on a breakaway. You don't mess with the Johan.