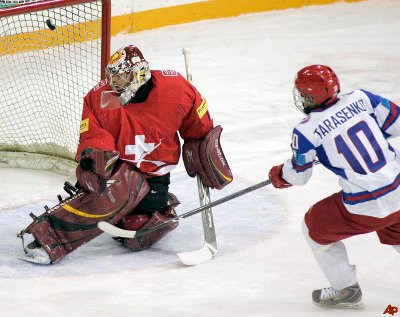 Position: Right Wing
Age 18
Date of Birth: December 13, 1991
Place of Birth: Yaroslavl, Russia
Height: 5' 11" Weight: 180 lbs. (Note: Vladimir seems to have a case of variable measurement syndrome - about half the scouting services have him listed at 5'10", 165, and the others at 6'0, 191! I've decided to bet on the average until and unless there's an official measurement performed at the NHL combine.)
Shoots: Left

The 2nd highest ranked European player according to NHL Central Scouting, and fourth ranked prospect overall according to International Scouting Services, Tarasenko was first runner up for the KHL's 2009 rookie of the year award, playing with HC Sibir. The son of Andrei Tarasenko, former RSL scoring champion and Olympian, he's an attractive talent, but the question of how difficult it might be to get him out of Russia could make him a bit too much of a gamble for many teams.

Tarasenko is a very good goal scorer with quick hands and lethal shot. He sees the ice well and owns playmaking skills too. He likes to play hard and is strong on his skates. The 5'11, 202-pounder has played for national team since 2008. Tarasenko's 18 points (10 goals, 8 assists) in 28 KHL games is the best in the KHL in his age group. He just turned 18 in December. At the recent WJC, Tarasenko was third in scoring with four goals and one assist. He played on the second line with Alexander Burmistrov (2010) of the Barrie Colts.

A fast, aggressive player with strong defensive responsibilities, Tarasenko could well fit into the blueprint that Scott Howson's been drawing up for the Blue Jackets, able to rush up the ice and make plays, but still defensively responsible. Most scouts see Tarasenko as a future top line forward, and his explosive skating and dangerous shot have lead to comparisons with Alexander Ovechkin, but the lack of physical play in Tarasenko's game and likely difficulty in getting him to leave the KHL (Tarasenko has already said he is under contract to Sibir through 2011) makes it a risk, particularly given the franchise's experiences with Nikita Filatov.