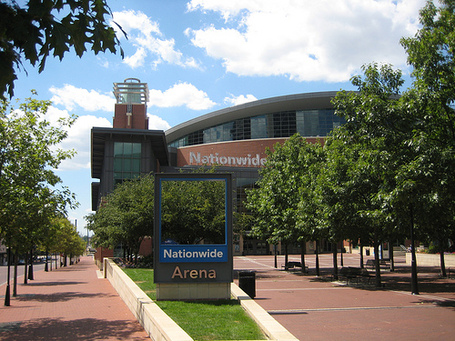 The Columbus Dispatch has announced that the Columbus Blue Jackets and the Ohio State University are close to agreeing on a deal which would place both Nationwide Arena and OSU's Schottenstein Center under joint management. This is likely to be the first step along the way to addressing the arena lease and management costs that are currently putting the club over twelve million dollars into the red every season.

Currently, the two facilities compete for concert and event bookings, frequently forcing the winning bidder to receive lower revenues for events. (For an excellent breakdown of the entire arena situation, from the current lease to competing with OSU and possible ways to resolve the problem, check out Jeff Little's excellent Arena Chronicles series over at The Hockey Writers.)

Under the new plan, OSU would undertake the management and staffing of both arenas, eliminating the competition for bids and saving the Blue Jackets at least one million dollars a year. This agreement also opens the door to both arenas becoming property of Franklin County's Convention Facilities Authority, relieving the CBJ of the costs to operate and pay rent for the use of Nationwide.

While it's nowhere near a full solution, this is a very positive sign that the arena issue is finally moving forward after almost a year with no real change from the City of Columbus, Franklin County, or Nationwide Realty. Once this step is in place, it seems likely that we will begin to see the groups involved come to the table to finish hammering out a deal that leaves the Blue Jackets in Columbus for the foreseeable future.