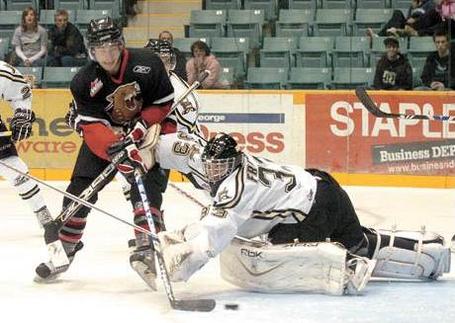 Despite missing much of the 2009-2010 WHL season due to a hip injury suffered in international play with Team Canada, Brett Connolly is a hard skating, aggressive forward with a nose for the puck and excellent stick handling skills. Playing for his hometown team, the Prince George Cougars, he was the first 16 year old to score 30 goals in the WHL since Patrick Marleau and the 2008-2009 CHL rookie of the year.

Another player who brings many dimensions. Connolly is a great skater with great strength. He battles it out for the puck, can bring his physical game to the ice at anytime and he's a smart player who can consistently be found around the puck. Saddled with a lengthy injury, where Brett goes in this Draft remains a mystery depending on how he heals.

Given the uncertainty of Nikita Filatov's return, the Jackets could hedge their bets by adding a player with a great wheels, a strong scoring touch, and a willingness to get physical to help make a scoring chance. Connolly has mentioned that he tries to model his play on Rick Nash - as he continues to develop and fill out, why not give him a chance to learn up close?

Brett Connolly of the Prince George Cougars (via PGCitizen)