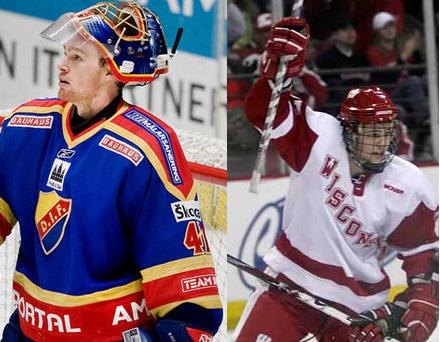 Relatively under the radar compared to the news of the continuing coaching search, or the seismic event of the Montreal Canadiens dropping the Washington Capitals out of the Stanley Cup Playoffs last night, the Blue Jackets announced this morning that they've inked a pair of entry level deals for the 2010-2011 season. One, the signing of 2008 second round pick Cody Goloubef, was expected. After playing for three years at Wisconsin and reaching the NCAA championship game this Spring, the smooth skating d-man had appeared to reach the peak of his NCAA career, and the Jackets agreed, inking him to a 3 year entry level deal that will likely see him refining his craft in Springfield, though I wouldn't be surprised to see him as an injury call up, similar to Grant Clitsome this year.

A more surprising signing was Gustaf Wesslau of the Swedish Elitserien club Djurgardens IF. The Swedish goaltender is 25 years old, weighing in at an impressive 6' 4", 198 lbs. Wesslau lead Djurgardens to the Elitserien championship game before falling to champion club HV71 in overtime of game 7. In 32 regular season appearances he posted a 2.29 GAA , 91.7% save percentage, and two shutouts. If he can adjust to the smaller ice and higher pace of the North American game, he could be very similar to Toronto's Jonas Gustavsson. Wesslau was signed to a one year, two way entry level contract. All signs point to him starting the year in Springfield, but given the CBJ are starting the season in Sweden, it's certainly possible that the club might bring him along for use in their exhibition games if he has a good preseason camp.

This signing also means a shakeup in Columbus' goalie prospects - with both Dan LaCosta and Kevin Lalande reaching RFA status this summer, it seems that only one will be retained by the parent club, and one has to think that despite his brief hero status last season when he was able to shut out the San Jose Sharks during an emergency callup, Dan LaCosta will be the odd man out. Since Lalande was acquired from Calgary at the 2009 trade deadline, the Kingston, ON native has taken over the starting role in Syracuse and LaCosta's confidence appears to have suffered as a result, posting only 7 wins and a 3.96 GAA in 26 starts. It's likely that GM Scott Howson will allow LaCosta to seek a fresh start with another club while using Wesslau to push Lalande ahead in his development in the AHL.