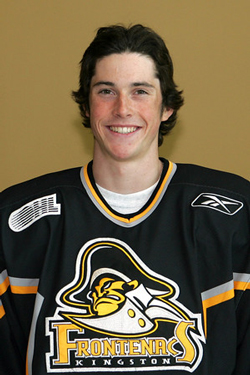 Erik Gudbranson is currently playing for the Kingston Frontenacs of the OHL. He helped his team to a record of 33 wins, 30 losses, 2 overtime losses, and 3 shootout losses and a #4 seed in the playoffs. Unfortunately, the Frontenacs were ousted in the first round. A knee injury, and a bout with mono limited Gudbranson to only 41 games.

Limited to only 25 games so far, Gudbranson has still managed to show a lot of the potential he possesses in his game. Gudbranson is a very good skater for his size, and has been a lot more involved offensively this year. He competes hard and isn’t afraid to play physical, which are all assets that will ease his transition to the NHL. If Gudbranson can regain his touch prior to his bout with mono when he returns, he could very well give Cam Fowler a run for the #3 slot, but if not, he might slip a few spots as well.

Why he would fit in Columbus:

Much like Cam Fowler, Gudbranson is an offensive defenseman. He's only going to get better with age. His 23 points in 41 games this past season is lightyears better compared to his previous season in 2008-09 (3-19-22, 63 GP). He's already being compared to Chris Pronger, and Dion Phaneuf. Not too shabby if you ask me.