Get Excited for Cam Atkinson!

Share All sharing options for: Get Excited for Cam Atkinson!

The 2008 NHL Entry Draft took place a little under two years ago, and at the time the Columbus Blue Jackets made some waves by drafting Nikita Filatov. He was regarded as the best forward in the draft, behind only Steven Stamkos, who just yesterday won his first Rocket Richard Award as the NHL's top goal scorer. (He shared the trophy with Sidney Crosby)

With their second round pick that year, the Jackets drafted a defenseman named Cody Goloubef. Goloubef is a member of the Wisconsin Badgers, a powerhouse team in the NCAA. He was part of what is generally regarded as the best blueline corps in college hockey, and is also a former member of the Canadian World Junior team.

Flying under the radar on draft weekend back in '08 was a High School Senior from Avon Old Farms high school named Cam Atkinson. He wasn't completely unknown however, as the Jackets used their 6th round pick, 157th overall on him. He had commited to Boston College, with his NCAA career beginning later that autumn.

Fast forward to this past Saturday, and Atkinson's BC Eagles were taking on Goloubef's Wisconsin Badgers in the final of the Frozen Four. The winner would be the champion of the NCAA. No longer is Atkinson an under-the-radar player. In fact, at the conclusion of the final game where his Eagles defeated the Badgers 5-0, Atkinson was alone at the top of the goal scoring table for the entire NCAA. He finished the year with 30 combined goals in 42 games played.

Atkinson's star shone the brightest in the NCAA tournament. In the final against Wisconsin, he scored two goals. In the semifinals against Miami, he had a goal. Going back even further, he had a hat trick and a pair of helpers in the Regional final against Yale. That's six goals and an assist in the four games that BC played in the tournament. The two goals against Wisconsin not only helped his team win, but of course also tied, and then gave him the lead over NCAA goals leader Bobby Butler. He was also named to the All-Tournament Team. 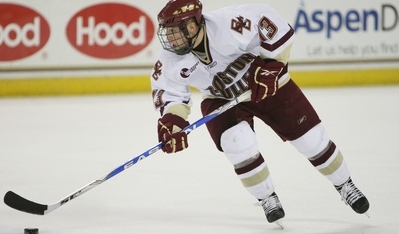 Atkinson is a smaller player, checking in at 5'8" 165lbs. Smaller players have been making inroads in the NHL over the past couple of seasons, so dismissing Atkinson as an NHLer would be unwise at this point. He makes up for his lack of size by being fast, a great skater and he possesses phenomenal hands.

Personally, the most exciting thing for me is that Atkinson is only a sophomore. He's still only 20 years old, and has already led the nation in goal scoring and won a championship. For a player who was potentially on a four-year plan at BC, the plan has undoubtedly changed. It's likely that Atkinson will spend one more year at BC, and then make the jump to the AHL. That is just speculation however, but one thing is for sure- before this season Atkinson was a middle of the pack prospect for the CBJ, and now he is very much one of the bright lights in the organization.

Atkinson, after winning the NCAA Tournament.