In this edition of Shrapnel: Former Jackets, Nash's move, Jagr, 5 surprises from the NHL season, and more!

Want to know what happened to the former Jackets? Here's the first list of many that brings us up-to-date with the guys who used to call Columbus home.

Nasher won't be seen playing regularly on a line with Crosby and Staal tonight. He'll be pulling shifts with Getzlaf and Perry. Iginla will take Rick's place on the top line.

I've heard a lot about comparing this version of the US team to that of the 1980 and 1960 teams. While I don't think many comparisons can be made, there is one thing they have in common with the '60 team. Its been an awfully long time since we've beaten our friends from the north.

Speaking of the 1960 team, Dispatch writer Rob Oller caught up with three members from that team to get their thoughts on the upset from Sunday night.

Hockey chat today. Be there or...don't, I guess.

Well look at that; NHL stuff. Even as the Olympics take over the sports world, there's plenty to talk about in the NHL. Puck Daddy looks at the top 5 surprises thus far from the 2009-10 season.

What we learned - Olympic style.

Looks like Jagr still has it. He could still be a top 6 guy in the NHL today. Incredible.

Hockey schedule for tonight. Be sure to keep an eye on these games to see who advances to the next round of the tournament!

Quote of the day:

"You'd rather beat them than anybody. Any time you beat them, you know you've beaten the best." 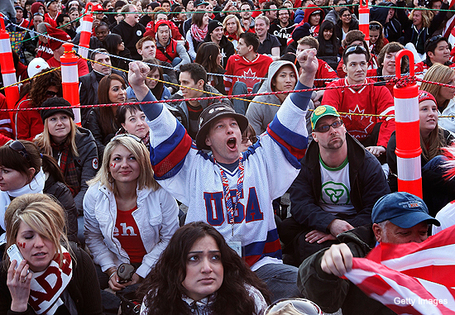