I recall your attention to the three keys we established for this game:

Watching this game, it felt a bit like I managed to get a bug down into the locker room. From the drop of the puck, though Atlanta certainly tried to keep the puck moving, the Jackets were constantly in pursuit of the puck, forcing the Thrashers out of the defensive zone and to collapse back around Ondrej Pavelec.

Speaking of the young Czech, full marks for Mr. Pavelec, who was simply heroic this evening, stopping 39 of 41 shots in the Thrasher crease.

The Jackets also got their offense going early, putting up 11 shots in the first period, and allowing Atlanta only 8 chances, including a late first period power play. Though the first period would end scoreless, there was a strong sense that Atlanta was hanging on by their fingernails to this game, and the Jackets seemed to control play for long stretches.

Despite starting the second period shorthanded, the Jackets continued to dominate play, and just before the five minute mark, the Jackets' first line would crack Pavelec's stone wall. In a strange echo of Tuesday's power play goal, Rick Nash would come out from behind the Atlanta net, curl up and pass to Jakub Voracek, who scooted right along the edge of the crease before passing through the crease to Derick Brassard, who flipped it behind Pavelec for the 1-0 lead.

Despite Antoine Vermette going to the box midway through the period, Columbus continued to outshoot the Thrash, though there were a pair of moments that gave Columbus fans micro-heart attacks, the first coming when Matheiu Garon was struck in the face by a puck -and- took a Ben Eager stick to his mask as the former Blackhawk attempted to redirect the shot, and needed a brief visit with the trainer before returning to play. Then, a few minutes later, Derek Dorsett would throw himself in front of a Dustin Byfuglien shot and went immediately to the bench afterward, clutching his arm, but the rough and tumble winger would be back out, only missing a single shift.

Nursing the lead, the Jackets didn't back off in the third period - if anything, the pressure increased. After Derek Dorsett stepped in front of another Byfuglien shot, he'd leave the ice again, this time clutching his shoulder, but would return again following the Jackets only power play, which was unable to connect, though Voracek had an incredible chance at the doorstep that just barely went wide.

As the period went on, however, the Thrashers clearly began to slow down, their game last night taking a toll on them. The Jackets were already keeping a solid pace in the faceoff circle, but it became dominant, winning again and again, tilting the ice. Finally, following a Thrasher offside call, the top line would strike again. Derick Brassard would win a faceoff, passing off to Nash, who returned the puck to Brassard from the far boards. Brassard would dish back to a wide open Marc Methot at the blue line, who would rifle a shot at the Thrasher net. The puck would "hop" past Pavelec into the net, and it was initially credited to Methot, but a video review of the play determined that Voracek, parked in front of his childhood friend from Kladno, had redirected the puck with his stick, causing the aforementioned hop.

On a normal night, a 2-0 lead would be just enough to make the team happy, but nervous. Tonight, that lead seemed as unassailable as a ten-spot. The Thrashers deflated - the Jackets would take the puck away and deliver 8 more shots in the next three minutes, burning away valuable seconds. Four minutes later, the Thrashers would make the decision to pull Ondrej Pavelec out of their net, being outshot 41-27. After a brief stoppage in play for a puck being redirected into the benches, Atlanta would take their time out, hoping to draw up a play that could solve Mathieu Garon.

The Jackets drew up a much simpler play.

After Sammy Pahlsson won the ensuing faceoff against Atlanta's Rich Peverley, he would skate up to the blue line and flip the puck up to an R. J. Umberger who had already started skating out of the zone almost as soon as the puck was dropped. Taking the ice with nothing around him except clean ice and the gaping net, Umberger skated up, flipped the puck in for his fifth goal of the season, and the game was over, no matter what the game clock said.

85 seconds later, it was official. Mathieu Garon had his fourth career shutout vs. the Thrashers, and his fourth win of the 2010-2011 season.

No-one was on the bottom of the barrel tonight. Not with back to back shutouts. I will simply leave you with this parting thought: 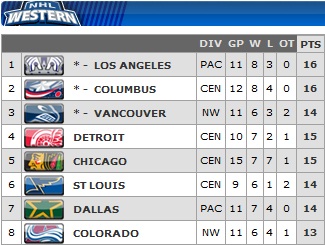 The Jackets will practice tomorrow at Nationwide arena, and return to action on Saturday night at home against the Minnesota Wild. The puck drops at 7pm.