On the Farm...Falcons first quarter

Share All sharing options for: On the Farm...Falcons first quarter 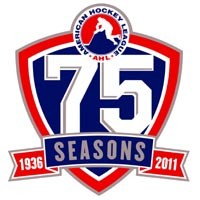 The 75th anniversary season of the American Hockey League has just passed the one-quarter mark for the Springfield Falcons. This is the first season that the Falcons are serving as the primary affiliate of the Columbus Blue Jackets. Despite Springfield's iconic history in pro hockey dating back to 1926, the Falcons have struggled on the ice for several seasons, last seeing playoff action in 2003. The last time Falcons' faithful saw playoff hockey beyond the first round of the Calder Cup playoffs was in 1997. At times, the local media in Springfield have reported the imminent demise of the Falcons. Quite frankly, there is not a harder working pro hockey executive than Falcons' President and General Manager, Bruce Landon. Landon has faced countless struggles in his desire to put a winning hockey club on the ice. Previous NHL affiliations have been with the Edmonton Oilers, Tampa Bay Lightning and Phoenix Coyotes. Each of those relationships saw their own unique issues. After the Falcons working agreement with Edmonton expired, there were many rumors of teams wanting to work with Springfield. The first time anybody in western Massachusetts knew that the Blue Jackets were on the radar was in mid-March, after the Columbus Dispatch went public with the information that the Jackets were negotiating with Springfield.

Ultimately, there is nothing that is iron-clad in the Jackets-Falcons partnership except for this season. The deal initially was signed for just one year, with an option on a second year. Regardless of length of the deal, the fans of hockey in Springfield are hoping for the one thing that they haven't had in recent years: a winning team. After investing some time on statistical research for this article, I came to one conclusion. The first quarter of a season is the first leg of a marathon. It isn't a sprint to make it through the first twenty games of a long and sometimes grueling schedule. Following is a table comparing this year's club to the previous five seasons, after 20 games:

As you can see, there have been some monumental collapses in Springfield over the last several campaigns. The closest to maintaining a balance between first quarter and full season record was the 2007-08 club. That was the first year of the relationship with Edmonton. Kelly Buchberger was the coach that season. The following season started off disastrously as Geoff Ward had been promoted to head coach by the Oilers. Before the season evenstarted, Ward had received and accepted an offer to join the staff of the Boston Bruins and worked with his old friend, Claude Julien. Jeff Truitt was promoted from staff assistant to head coach and this proved to be a struggle from day one. Truitt completely lost control of the locker room and was fired fifty games into the season and was replaced by Rob Daum. Daum had been scouting for the Oilers. He was an assistant for the Oilers in the 2007-08 season. Prior to that, he had two full seasons as head coach of the Houston Aeros of the AHL. His first season, 2005-06 his club posted a 50-24-0-6 records and made it to the second round of the Calder Cup playoffs. The following season, the Aeros were 27-43-0-10 and missed the playoffs. Daum was brought back after finishing the '08-'09 season by the Oilers. He struck me as far too laid back for the job, and let his assistant, Gerry Fleming do most of the heavy lifting. This year, Fleming continues as an assistant coach with the Oilers' new AHL affiliate, the Oklahoma City Barons.

After an early season lull in their schedule, the Falcons are currently in the midst of playing ten games in sixteen days. It's scheduling quirks like this that are meant to contribute to a player's development. After this current run is done, the Falcons will play a six game block between December 3 and December 12. After that, the Birds only have two road games (Dec 17 in Bridgeport and Dec 19 in Providence) until the pace resumes with five games in seven days December 26th-January 1st.

Unlike past Falcons seasons, the Jackets had a coaching candidate in Rob Riley, who brought to the table a lifetime of coaching experience. Riley was a collegiate coach at Army from 1986-2004. Riley's legendary father, Jack, was the Army coach from 1969 until 1986. Jack was also the gold medal winning coach of the US Olympic team in the 1960 winter games. For the past several seasons, Rob had been a scout for the Blue Jackets, based in the northeast. It has been apparent since the Falcons broke camp that Riley is the authority on this year's club. Riley is joined behind the bench this season by Brad Larsen. Larsen wrapped up a 13 year playing career last season with the Portland Pirates of the AHL. Larsen was a leader on the ice and a veteran of 294 NHL games with the Colorado Avalanche and the Atlanta Thrashers. He also competed in 384 AHL regular season games as a member of the Hershey Bears, Chicago Wolves and Portland.

The leadership of the Falcons behind the bench has blended nicely with an on-ice leader in Ben Guite. Guite, a veteran of 175 NHL games with Colorado, Nashville and Boston has also seen ice time in the AHL with Bridgeport, Cincinnati, Providence Albany and Milwaukee. He has logged in 487 AHL games prior to this season. From the start, the 32 year old Montreal native established himself as the leader for this year's club. Guite was signed in August by the Jackets to solidify the roster in Springfield. He is now captain of the team.

Several of this year's edition of the Falcons were in the Blue Jackets organization prior to this season. Among them are: Maksim Mayorov, Tomas Kana, Trevor Frischmon, Nick Holden, Grant Clitsome, Brent Regner, Jonathan Sigalet, Tom Sestito, Mike Blunden, Michael Ratchuk, Tyler Murovich and Kyle Neuber. These players saw time in Syracuse last season and have continued their development so far this season in Springfield. Each of them at one time or another has had a positive impact on the team. Currently Neuber, Sestito and Kana have suffered injuries. All three have been out of the lineup for some time. Sestito may be the first one back (aggravated hip). Neuber has a knee injury and Kana required surgery to repair a torn ligament in his thumb, suffered in a fight filled contest in Hartford on November 13th.

Currently, rookie Matt Calvert has become the Falcons' leading scorer with 8 goals and seven assists for 15 points. Calvert has played in all 20 games so far. Matt's hustle in the early stages of the season has been exceptional. Twice this young season, I've seen him on all out end-to-end sprints to break up icing calls, one of which led to a Falcons goal. I've embedded that clip elsewhere, but it's worth seeing again. Just after the second goal, watch the Falcon tearing it up through center ice; Matt's hustle is on the third goal in the clip:

For the first two-thirds of the schedule, the Falcons' first line was made up of Tom Sestito, Mike Blunden and Chad Kolarik. The trio was broken up on November 11th when Kolarik was traded by the Jackets to the New York Rangers. In return, the Jackets received the captain of the Hartford Wolfpack, Dane Byers. Byers has been a great addition to the Falcons. He brings instant credibility and further solidifies the leadership of the club. While Sestito is on the mend from his hip injury, Blunden has been skating on a line with Byers and recently signed Chris D'Alvise. D'Alvise has been a nice addition. In his three games D'Alvise has netted one and added two assists for three points.

Further adding to a veteran presence on the Falcons, also on November 11th, former Falcon Nick Tarnasky signed a PTO. Tarnasky, a veteran of 245 NHL games with Tampa Bay, Florida and Nashville, played for the Falcons from 2004-2006. This was followed by another veteran signing. On November 18th longtime New Jersey Devil, Jay Pandolfo joined the Falcons on a Pro Tryout agreement. Pandolfo has played in 819 games as a member of the Devils and has had his name twice engraved on the Stanley Cup.

Where I have seen a tremendous difference in comparing this year's club to those of the recent past, is that this season the players take to the ice each night expecting to win. I have seen them erase two goal deficits. I have seen them come back and nearly negate as much as a four goal deficit. The last two seasons especially, not getting the first goal of the game led to additional fundamental mistakes. Digging a two goal hole, even in the first period, and the game was all but over. That is the primary difference this season. This year's edition of the Springfield Falcons is a playoff caliber hockey team.

Based on the AHL standings as of November 25th, nine of their next 11 games are against teams with at least as many points as the Falcons. The only two not in that group are with Bridgeport (17 pts.). As posturing for playoff positioning commences, these are 11 pivotal games for the Falcons. Six of those eleven will be on the road, starting tonight in Portland, ME when the Falcons, currently 5th in the Atlantic division, take on the divisional leaders. After their first 20, the Falcons are 6-3-0-1 on the road while only 4-6 at the MassMutual Center in Springfield. The Falcons will hit the halfway point of their schedule on January 14th. Between now and then, watch for Falcons updates here on The Cannon. Also be sure to check out the Falcons website. Game recaps usually feature Falcons issued youtube videos of game highlights.