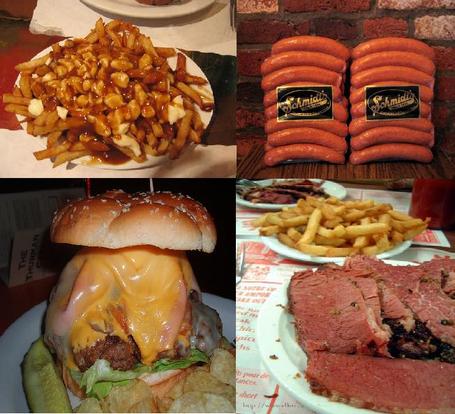 Much as I love the rich tradition and history of Montreal hockey, and the majesty of playing an original 6 team that isn't in our division, when you start talking about Montreal with someone, there are three inevitable topics.
As awesome as Martin Picard is, and as delicious as the food you see at Au Pied De Cochon or Toque looks, most people who think of food in Montreal really come down on one of two things: Poutine or Smoked Meat.
Both delicious. Both terrible for you. Both oh-so-cravable, particularly when you've had a bit too much to drink, or you need to ward off that hangover before it starts.
A while ago, some friends and I were trying to figure out if Columbus has a "signature food." Outside of candy buckeyes, we really couldn't settle on one because of all the different mishmashes and ethnic cuisines around town. But we could agree that Columbus has some signature restaurants, so it's up to them to carry the flag for us.

I could point you to some of the amazing places in town like Luce, Kihachi, or Deepwood, but this is a hockey blog, not a food blog, and let's face it - when you're up against fries drenched in gravy, you need some serious gutbusting power, not foie gras and tuna neck.
That's why I'm putting forth two Columbus institutions that never let you down when you're in the mood for something delicious, yet heart-stopping: Schmidt's and The Thurman Cafe.

Schmidt's offers you the delicious brats, the spicy bahama mama's, the cripsy latkes, and the monstrously fluffy cream puffs.

The Thurman offers the biggest chicken wings in town, some surprisingly good flatbread pizzas, and burgers the size of a small child. People break their diets just by watching somebody else eat one on TV. There is nothing that will trigger your next heart attack quite so well as a Thurman Burger.

Choose your weapon in the caloric battle royale!