Share All sharing options for: Enhance Your Experience: Go Online! 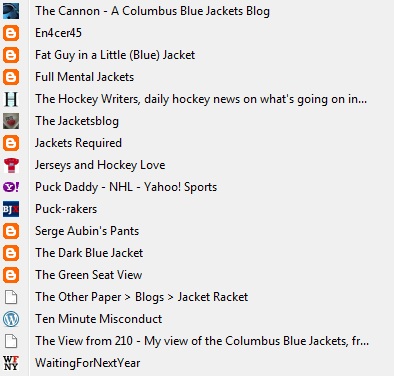 For hockey fans in general, and Jackets fans in particular, the world can sometimes be a lonely place, particularly when you're confronted by a teeming wall of scarlet and grey as far as the eye can see every Friday and Saturday. (And Sunday, and Monday, and Tuesday, and...)

Don't get me wrong - I was raised in Columbus, and I love it when the Buckeyes win, and I'm proud of THE Ohio State University and all the good it does in the community. But the fact that it's nearly impossible to hear hockey discussion on the radio without buying an XM receiver, even on the team's "flagship station", is daunting. The fact that people will discuss the last Buckeye football or basketball game in my office until they're ready to pass out, but only a bare handful have anything to say about the Jackets, is frustrating. The fact that people still make the "...hoc-key?" joke sometimes when I mention I'm a fan is irritating. And I know that I'm not alone.

So, what can you do?

You go out to the internet, that's what.

The glory of the internet is that you can find anything there....but you can especially find hockey fans there. For those following the team locally or from abroad, it's a fantastic resource that puts you in touch with other Blue Jackets fans, and fans of the sport in general.

Of course, not to toot our own horn too much, but I think we've got a great little piece of the virtual world right here for you at The Cannon to check out, and it's easy for you to take part!

1. Sign Up: As I write this, we currently have 599 members. Admit it - it would be kinda neat to say you're #600, wouldn't it? It doesn't have to be your real name - plenty of us go by something a little more incognito and irreverent. Plus, once you've signed up, you can...

2. Comment!:  Like an article? Hate an article? Think the article was mediocre, and certainly not up to our usual standards of peerless quality and deathless prose, but you did find one point particularly interesting? We can't know unless you tell us. The feedback we get from you is part of what makes writing these posts so fun, and The Cannon team always enjoys hearing from you, regardless of how you do it, but the nice thing about commenting on posts as opposed to email is that it can inspire others to join the discussion!

3. Share!: Did you catch something on XM radio, the coaches' show, or reported online that we've missed? Put it up for us! Did you have a take on the last game? Write about it! Want to get people talking about your favorite former Jacket or the best goal you've ever seen? Feel free to write a FanPost or FanShot - and if it's something really special, don't be surprised if we promote it to the front page to make sure that people see it!

4. Follow Us On Twitter: You can find us at @CBJCannon, where we'll not only post links to new content, but occasionally just tweet to see what you're thinking and touch base with everyone - and don't be surprised if you ask a question and get tweeted back!

5. Get In The Game (Threads): If all else fails, if you can't make it to the game and are dying to talk about it, don't forget that we'll post a game thread for every pre-season, regular season and (god willing) playoff game the Jackets play in! We'll try to keep things as up to date as possible, and we're always happy to talk with you guys as the game goes on. Just remember to keep things in good taste if fans from the opposing side show up looking for a bit of friendly discussion.