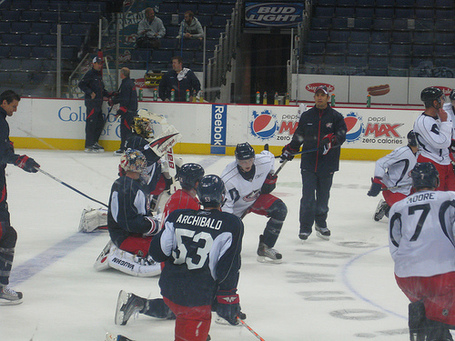 The Blue Jackets have announced that, beginning on Thursday morning, all non-game day practices will be open to the public, regardless of whether they are held at the Ice Haus or on the main ice at Nationwide.

This is bigger news than you might think, and another sign of how I think the club is "getting it" with trying to reconnect with the community after last year's disappointing season.

In terms of why open practices are a good idea, I'm going to refer to Tom over at Dark Blue Jacket. He's pretty much nailed it, but I'll add a few reasons for anyone considering going.

Back specifically dealing with the Blue Jackets, though, there's another reason why it's worth going to these practices if you have the opportunity: They've opened ALL practices, aside from the game day skates. Most NHL teams that have an open practice policy will only allow the public to attend practices held at the team's designated practice facilities. Others, like the Rangers, Islanders, Leafs, and Wild, do not hold public practices at all, or only hold a few during the pre-season as special events.

In the past, the team made practices in the Ice Haus available, and it made sense - given the way the Ice Haus is built, there's no real need for ushers or security. There's one entrance, and one exit. You go up and you sit in the bleachers, and maybe you walk around the edge of the glass for a few pictures. That's about it.

Nationwide makes things much more complex - in addition to letting you get much closer, it also brings in the question of how fans will be allowed in, if the media will be given a separate area to cover the practice from, how much you can move around the building, and you pretty much have to put in some level of ushers or building staff to help guide people around, keep them away from places they shouldn't be, and be available to assist someone in the event of an emergency or injury to a spectator. (Is it unlikely? Sure. But it can still happen. If anything, the greater amount of pucks moving around on the ice makes it more likely that a puck might leave the playing area.)

One fan-friendly consideration is the fact that for the fans, practices in Nationwide will get you much closer to the action. Just compare pictures I took at a training camp practice in the arena compared to in the ice haus the year before. If you're going to a practice and someone wants to tag along who isn't really familiar with hockey, would you rather watch the team doing drills from a cold metal bleacher above the rink, or from seats in front of the penalty boxes?

With the Jackets opening the arena practices to the public, they're taking on those commitments and challenges in the hopes that perhaps those people who want to see the team, but do not have the time or funds to attend a game, will take advantage of the opportunity.

In other words, they're making their life harder because they think we're worth the trouble.

The least we can do is say thank you to that.