Share All sharing options for: Game 3: The Curtain Rises

I love that picture.

As the Jackets finally hold the first regular season home game for their 10th season at Nationwide Arena, everything seems to be lining up in favor of success. The team is ready to go, the Blackhawks are going to be short several key players, and the building is within 500 tickets of being a sellout as of 2pm today.

(Note: This GT is being written for you readers of the future while I am preparing to attend the game in fine style...from the past. You are basically reading the results of TIME TRAVEL. Isn't technology awesome?) 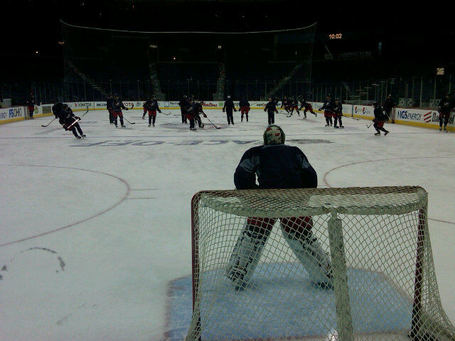 The most surprising news to come out of the team's pre-game skate is that defenseman Mike Commodore is a healthy scratch tonight, and winger Chris Clark will get his first regular season start this evening.

The team described it as simply an issue of Marc Methot playing his way over #22 on the depth chart.

In Methot's defense, he had two fairly solid games in Sweden, while Commodore had a decent game 1 (save for a questionable penalty call), but a poor game 2, particularly with a PK gaffe that lead to a San Jose goal. (Though to his defense, R. J. Umberger also whiffed on clearing the puck immediately afterwards on the same play.) With Kris Russell looking good after rehabbing his knee injury, it's a case of too many bodies and not enough slots to fit them into.

Commodore, to his credit, seems to be handling it fairly well - he simply told the media at the scrum this morning that he would not be discussing the matter. The coaching staff, likewise, have been favorable in their comments, remarking on his improved fitness and that the big defenseman has done everything they've asked without complaint.

Is he really our 7th defenseman right now? I don't know about that. Commodore showed some very strong play in the pre-season. Personally, I thought that Rusty Klesla had just as many issues in the pre-season and European games. Commodore, however, was taken advantage of a bit more by our opponents, and so he will spend a little time reflecting on that.

If I had to guess, he'll play tomorrow when the team is on the second half of the back to back games in Minnesota, but it's a clear message from the coaching staff to the entire team that poor decisions on the ice will have consequences, and that paychecks do not guarantee playing time.

For those going downtown (why aren't you there already?), the team has mentioned that the opening night ceremonies will begin at 6:45, and that fans "should make sure to be in their seats for something special."

For those who aren't going downtown (or believe there's no such thing as information overload), follow Blue Jackets Manager of Communications Ryan Holtmann on twitter, and he'll be sending out tweets with behind the scenes info, special events, and some "day in the life" flavor for what it's like to work for an NHL team on such a busy day.

A win tonight would jump the Jackets up to 3rd in the Central division and potentially tie them for a top 8 spot in the Western Conference standings. I realize it seems silly to talk about that at game #3, but the points you earn in October, particularly against a division rival, are ones you don't have to scrape for in the last months down the stretch.

The team needs to strike hard, sure, and fast. We hung a snowman on Chicago the last time these teams played in the regular season. Wouldn't it be fun to win the first home game of the 10th anniversary season by hanging 10 on them tonight?

Who scores the first goal at Nationwide Arena this season?