Share All sharing options for: Calvert awesome again, but Jackets fall to Stars 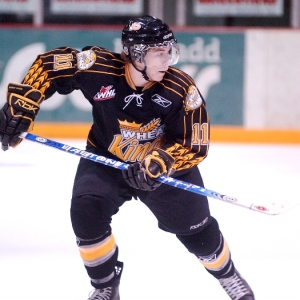 On Day 4 of the Traverse City prospects tournament, the Jackets took on the Dallas Stars and were defeated 4-3. Matt Calvert continued to dominate, scoring another pair of goals. Stefan Legein had the assist on the first one, and the second goal was assisted on by David Savard (one of my new fave prospects, love this kid). The Stars were up 2-0 early in the second period before Calvert scored to cut the deficit to one.

Calvert scored again early in the third to tie the game, and then each team traded goals with Dallas getting the last marker to win it. Both of Calvert's goals were on the powerplay, and the Jackets third goal was scored by invite Paul Bezzo, assisted by Tim Miller. Bezzo was also involved in one of the four fights that took place.

Calvert now leads the entire tournament in both overall and goal scoring. The schedule for the rest of the week is TBD by the games taking place tonight. With a record of 1-2, things aren't looking great for the Jackets to grab another championship up in Traverse City.

Calvert is a very interesting player. For the last few seasons, he has been a member of one of the most dynamic lines in junior hockey with the Brandon Wheat Kings. His linemates are 2009 NHL first rounders Brayden Schenn and Scott Glennie. Many have questioned if Calvert's stats were due to playing with such talented players. I know that has certainly helped, but it's not the whole story. While Schenn and Glennie are truly gifted players, Calvert is a workhorse. He needs to work harder than those two in al areas of the game because he simply isn't as naturally talented.

A tournament like this is a way for Calvert to prove he isn't reliant on playing with skilled linemates. He has been truly dominant so far in this tournament, and his success in Michigan dates back to last year as well, when he had a strong performance in Traverse City. Brandon is hosting the Memorial Cup this year, any the Wheaties are primed for a run. They are guaranteed to be in the final four as host, and Calvert should be a big part of their offense. Next year he will graduate to the Crunch, and it wouldn't be a surprise to see an all-out effort player like Calvert crack the Jackets as a third line player shortly thereafter.