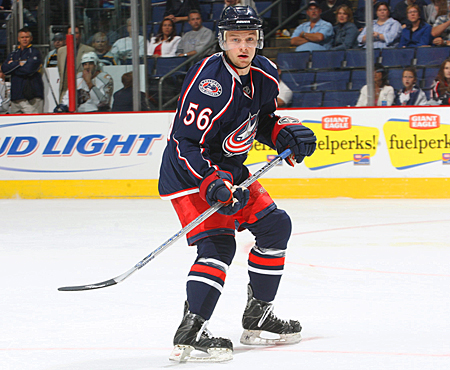 I'm a little late to the party on this tourny, as we are currently on Day 3 of the tournament. Let's catch up:

On Day 1, the Jackets prospects took on the Minnesota Wild. By all accounts it wasn't a good game for the boys in blue. The final result was only a 2-1 loss, however it could have been much worse. Stefan Legein scored the only goal, with an assist going to Matt Calvert.

Yesterday was Day 2 of the tournament, and the Jackets played their second game. They found the back of the net more often, and came out with a 5-4 win, but it was another sloppy affair. The Jackets were 1 for 10 on the powerplay, and gave up a few leads. The Jackets gave up a goal very late in the third, after scoring an empty-netter. Matt Calvert had a pair of goals, one being a shorthanded empty-netter. Cass Mappin had a shortie of his own, and Tomas Kubalik had two goals, including the lone powerplay marker.

Today is Day 3 of the tournament, and the Jackets are only scheduled to practice. They take to the ice again tomorrow at 3:00pm ET to face the Dallas Stars.

After only two games, there are some patterns developing. The Jackets are currently second in the 8 team event in terms of PIMs, they have the fewest shots -for , and have an even plus-minus.

Here's a look at the roster:

I've bolded the players who are Jackets prospects, all remaining players are free-agent invitees. Most of the high end young players in Columbus are either already in the pros, (Voracek, Filatov, Mayorov) or are college players. College players must pay their own way to these events, so that explains the absence of top prospects like Cody Goloubef, Will Weber and Ted Ruth.

Of the nine players in this tourny who are already Jackets prospects, four are picks from this year's entry draft. They are first rounder John Moore, defenders David Savard, Antom Blomqvist and forward Kyle Neuber. Neuber is on the roster but isn't playing, as he currently has a broken finger. Moore is arguably the team's best player, and it's great to see a European player like Blomqvist make the trek over to get a taste of the North American pro game. Savard is a player to keep an eye on over the next few seasons, as he is a very talented puck-mover.

The other five are made up of three forwards- Stefan Legein, Matt Calvert, and Tomas Kubalik- and two blueliners- Steve Delisle and Brent Regner. Legein is still working to regain the trust of the CBJ brass, scoring in game one certainly helps. Calvert is the team's top offensive prospect outside of Filatov and Mayorov. He is an extremely hard worker and has great hands. Kubalik is another Euro who made the trek over, and will be staying in North America to play in the QMJJHL this year. Delisle is a safe defender, who is at his best when you don't notice him. The organization is very high on Brent Regner, a solid puck-mover. Regner is currnetly suffering through a bout of mono, which will push back his start to the season.

Here's a quick blurb on each of the invites:

Archibald: Just completed his rookie season with the Barrie Colts, a late bloomer with offensive skill and had a great playoff (4-3-7 in five games). Worth keeping an eye on.

Bezzo: A defensive defenseman, is a two-year vet of the OHL. Plays with some snarl. Meh.

Brodie: Brodie is a two-way defenseman. He plays a very physical game. He bounced around in Jr. A last year, but has a ton of potential. Hoping for a contract for this guy, make him a CBJ prospect.

Caria: Caria just completed his junior career in the OHL. He is a forward who can put up big points, especially if he is playing with skilled linemates. May make some noise.

Andrew Clark: I am really pulling for this guy. He put up big-time points on a great Brandon team last year. He was a teammate of Matt Calvert. Just finished his junior career.

Filangieri: A no-nonsense blueliner with good size, Filangieri played in a handful of games with the Crunch last season after completing his college career with Boston College.

Harvey: Kevin Harvey played a bulk of the season with the Crunch last year. He's a career minor-leaguer, who will likely return to the Crunch this season on an AHL deal.

Higgins: An offensive forward who was a teammate of Filangieri. A bit undersized, but scored more than a point-per-game at the college level. Signed by the Crunch to an AHL deal. Like this guy.

Jordan: Jordan is a physical, banging forward. He won't put up any points, and isn't afraid to muck it up. No thanks from me.

Mappin: Wasn't taken in the most recent entry draft. A checker for life. Maybe we see more of him down the road?

McBride: Had a tryout with Hartford of the AHL last season. Likely a Cruncher this season.

McAvoy: Has great size, can put up numbers. Just completed his junior career, and I see a bright future for him.

Miller: Another guy who saw some late-season action with the Crunch last season, I'm not really impressed by him. Has to carve a niche out.

Murovich: Can definitely produce points, Really undersized though. Is eligible to return to the OHL this year.

Ray: Has mostly played in Ontario Jr. A. I have no hopes for him. I find it interesting that he even got an invite.

Roeder: Just finished his college career with Miami (Ohio) and I really like the guy. He wore an "A" last year. He's undersized for a blueliner at 5'9, but i just have a hunch we'll see more of him.

Tanksi: Your standard hockey player. Doesn't wow, eligible to return to junior. No thanks.

Agozzino: Undersized offensive forward. Lump him in with Tanski.

Loverock: The number one goalie in Sudbury of the OHL last season, he has played in both of the Jackets first two games at this year's tounrament. The organization needs numbers in terms of goalies, so he wouldn't be a bad guy to have for depth purposes.

Jamie Tucker: Didn't play very much last season behind Tyson Sexsmith, but when he did he was money. He had an 18-1-1 record. I look forward to seeing how he does when he gets some action.

Here are a few links to help you follow the tourny:

- John Moore is blogging from the tourny HERE

- Here's a preview, brought to you by Hockey's Future. Click HERE

Personally I love this tournament. It's a great chance for new draftees to get accustomed to the organization, for existing prospects to strut their stuff, and for undrafted free agents to try to forge a pro career. Last year was fantastic, as the NHL Network broadcasted games. This year however, they aren't. It's a perfect way to gain viewers late in the summer, and it's much better than the continuous loop of "classic" games they broadcast. Maybe next year.