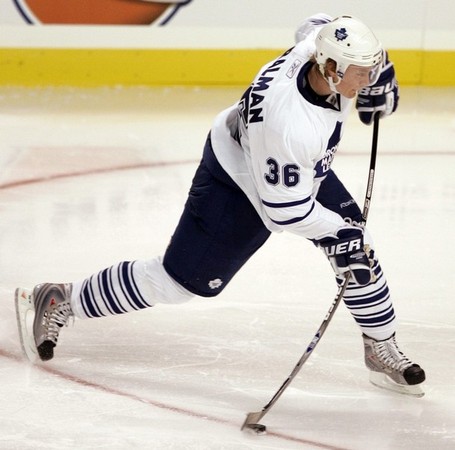 The Jackets swung a deal today to acquire a puck-moving blueliner, trading a 2010 third round pick to the Flames for Anton Stralman. Stralman is a right-handed shooter who can quarterback the powerplay. He has a howitzer of a slapshot, and has a lot of offensive upside.

Here's his scouting report on The Hockey News:

ASSETS: Has plenty of puck poise and on-ice maturity. Owns a projectable frame and offensive upside. Is good on the power play point due to a hard shot.

I like this move a lot. He's young, fills an obvious hole on the PP, and came at a relatively cheap price. Check out this end-to-end rush from when he was a member of the Leafs:

Here's hoping we can see some of that in Columbus this season. Along with this move, the Jackets also released Martin Skoula from his tryout agreement. I now turn my thoughts to how the pairings will shake out. Maybe something like:

How do you feel the pairings will end up? Hit the comments!