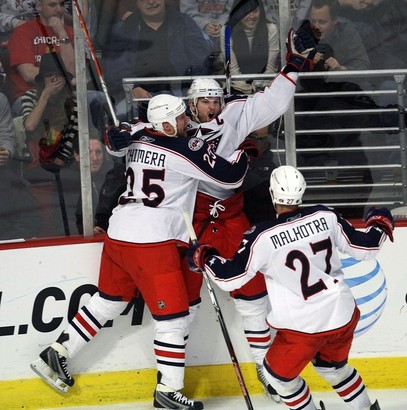 Rick Nash, scoring the goal that clinched the first-ever playoff berth for the Jackets


2008-2009 Recap: The '08-'09 season was the most successful in franchise history, as the team made the playoffs for the first time and two players came away with some hardware at the NHL Award ceremony. The biggest story for the Jackets, aside from making the postseason dance for the first time, was the emergence of goaltender Steve Mason. After starting the season on the injured list, he made three starts in Syracuse of the AHL before getting called up to Columbus. The rest is history as Mason not only supplanted Pascal Leclaire as the starting goaltender (which led to Leclaire being traded to the Senators at the deadline for Antoine Vermette) but he also went on the win the Calder trophy, as the NHL's top rookie. The reigns were officially handed to Rick Nash, who led the Jackets in scoring and won the NHL's Foundation Player award for his work in the community. It was also his first full season wearing the captain's "C" in Columbus.

There was a significant amount of turnover in the offseason leading up to last year, with the team adding new faces in RJ Umberger, Kristian Huselius, and Mike Commodore via free agency. The team also traded enigmatic winger Nik Zherdev to the Rangers for Fedor Tyutin, who became the Jackets top defenceman. Before being sidelined for the season due to injury, Derick Brassard was having a true breakout in his rookie season, and would have given Mason a run for his money in terms of the Calder race. Other rookies to make a significant impact were Jakub Voracek and Derek Dorsett.

The team's stay in the playoffs last year was a short one, suffering a sweep at the hand's of the defending champion and eventual Western Conference champ Detroit Red Wings.

Who's In: The Jackets didn't have the same level of turnover as last summer, but nonetheless dipped into free agency again. The signed center Sammy Pahlsson to be their everyday checking center, and Mathieu Garon to back up Steve Mason. Mason was overworked last year, and it showed down the stretch. Signing a veteran and former starter like Garon will allow the team to give Mason more rest. The incumbent checking center, Manny Malhotra, wasn't given a new offer and was let go as a free agent. Pahlsson replaces him, and will fill the third line center role much better than Manny, due to the fact that Pahlsson is a more defined player. Also looking to crack the roster is rookie Nikita Filatov. Other new faces could include Mike Blunden or Alex Picard, two players who have spent their careers in the minors thus far but are looking to crack the NHL squad.The Jackets signed free agent Pascal Pelletier as a depth forward, and Mathieu Roy as a backup blueliner. They will likely spend a bulk of the season in Syracuse.

Sterngths: As with any club coached by Ken Hitchcock, the Jackets will be strong defensively, and will play with a physical edge. The defensive unit is underrated, with some very physical players who like to bang the body. They play a tight game in the defensive zone which limits chances. Rick Nash is a stud up front, and wi

ll score between 40 and 50 goals consistently. There are some other great young forwards on the team, namely Derick Brassard, Jakub Voracek and potentially Nik Filatov.Steve Mason is a rock in net, and will look to build off of an impressive rookie year.

Weaknesses: The team is absolutely woeful on the powerplay. They finished dead last in the league last year with the man advantage, and did nothing to improve the situation of lacking a true PP quarterback. Coinciding with the lack of a PP QB, the team is also thin on puck-moving blueliners. Outside of Kris Russell, the Jackets don't posses a legit offensive threat on the back-end. It's relevance to the game can be argued, but the Jackets lack an enforcer. There are guys who are willing to drop the gloves, like Dorsett and Jared Boll, but neither are a true heavyweight.

Predictions: This is a tough one to call. I think it's safe to say that by playing with Nash and Huselius, Brassard will have a strong season. I'm willing to say 60-70 points. That may seem a little high, but you can't forget the pace he was on last year before the injury. Before season's end I think Jason Chimera will have found a new home, due to the emergence of Nikita Filatov. Filatov will be a Calder finalist. Steve Mason will continue to be brilliant in goal, and Garon will be one of the ttop backups in the league. Antoine Vermette will have a career year, his first as a full-time scoring line center. These predictions are fearless!

This will certainly be an interesting year for the Jackets, will they follow up their first trip tot he postseason by going deeper into the playoffs? Will Filatov truly be the star we all hope he will be? Can Mason avoid the sophomore slump? These questions will make for a most interesting season!