Share All sharing options for: It's Official- Vermette Signed for 5 More Years 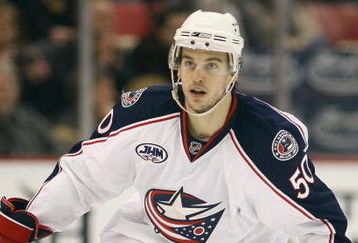 Another deal done- this time it's Antoine Vermette, who signs a new 5-year extension that will kick in at the end of this upcoming season. With the recent extension given to Derick Brassard, this gives some serious stability to a position that has haunted the Jackets since their inception. There has never been two clear-cut scoring centers before, but this move ensures that the Jackets have two young, highly skilled pivots to anchor the scoring lines.

He will earn $3.75 million per season making the total package worth $18.75 million. Vermette still has one season remaining on his current deal which pays him $2.76 million. The new agreement does not contain a no-movement clause.

There are some questions regarding this move- Vermette has played more wing than center in his NHL career, but didn't look out of place last season anchoring the second line from the trade deadline onwards. Personally, I think this is a great move for the franchise. Not only because of the stability it offers, but also because Vermette has the ability to truly flourish with the Jackets. He will be playing with very skilled wingers- the likes of Umberger, Voracek, perhaps Filatov- and he is also an above average defensive player, which bodes well for a team coached by Ken Hitchcock.

Before I purchased the Center Ice package three years ago (why didn't i have it before!) I would watch a lot of Ottawa Senators games. I was able to watch Vermette develop from a young rookie into what he is now. I also followed his career in a limited capacity when he was in the QMJHL with Victoriaville.

Portzline has some great quotes in his Puck-rakers blog post regarding the signing- be sure to check it out.