Jackets Hockey is Back!

Share All sharing options for: Jackets Hockey is Back! 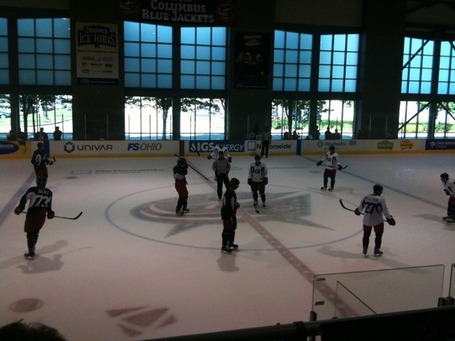 After undergoing physicals yesterday, the Jackets began the on-ice portion of training camp today, with two of the four owner-picked squads facing off at the Dispatch Icehaus. The format for camp was created by coach Ken Hitchcock- the four  owners conducted a closed-door fantasy draft, with every player on the training camp roster selected by an owner. The four owners are Majority owner John P. McConnell and minority owners Jay Crane, Ron Pizzuti and John Wolfe.

The first game took place this morning, with Team Crane defeating Team McConnell by a score of 3-2 in a shootout. The goal scorers for Team Crane were Derek Dorsett and tryout Darren Archibald. Scoring for team McConnell were Antoine Vermette and Brent Regner. I have high hopes for Regner, and he is very much in the mix for the seventh-defenseman spot. Recent first round pick John Moore scored the shootout winner.

In addition to scoring a goal, Archibald was also involved in a fight with Kevin Harvey. Camp invite Brock McBride was absolutely levelled by Rusty Klesla early in the game. Klesla is a player with a lot to prove. Rusty has been criticized for not living up to his lofty status as a first round pick, but if his play in the 2009 playoffs are a good indicator, Rusty has finally developed into a top shutdown blueliner.

The second game was between Team Wolfe and Team Pizzuti. Team Wolfe won the game 5-3. Scoring for Wolfe were Jon Mirasty, Kris Russell, Rick Nash, Tom Sestito and Grant Clitsome. Getting the markers for Team Pizzuti were invites Scott Tanksi and Tyler Murovich, and Nik Filatov got the third goal. Clitsome is another player in the mix for the seventh defenseman spot, so it's good to see he and Regner get on the scoresheet. Filatov will be a Jacket this year, but continued offense could get him a spot on the top two lines, perhaps supplanting RJ Umberger.

If you were at any of the games today, leave some comments with what you saw and who stood out to you!